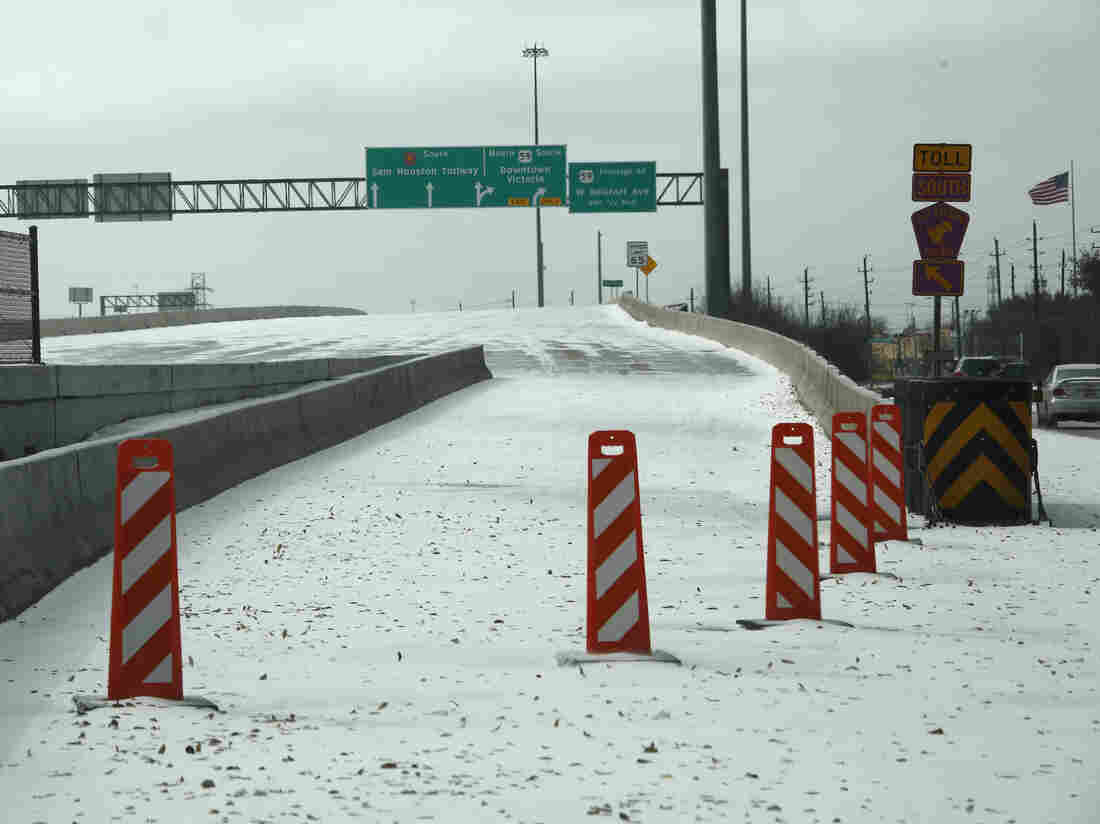 A highway on-ramp in Houston is closed due to snow and ice on Monday. Frigid temperatures, icy roads and power outages caused by a major winter storm have interfered with COVID-19 vaccine distribution in Texas and several other states. Chengyue Lao/Xinhua News Agency/Getty Images hide caption 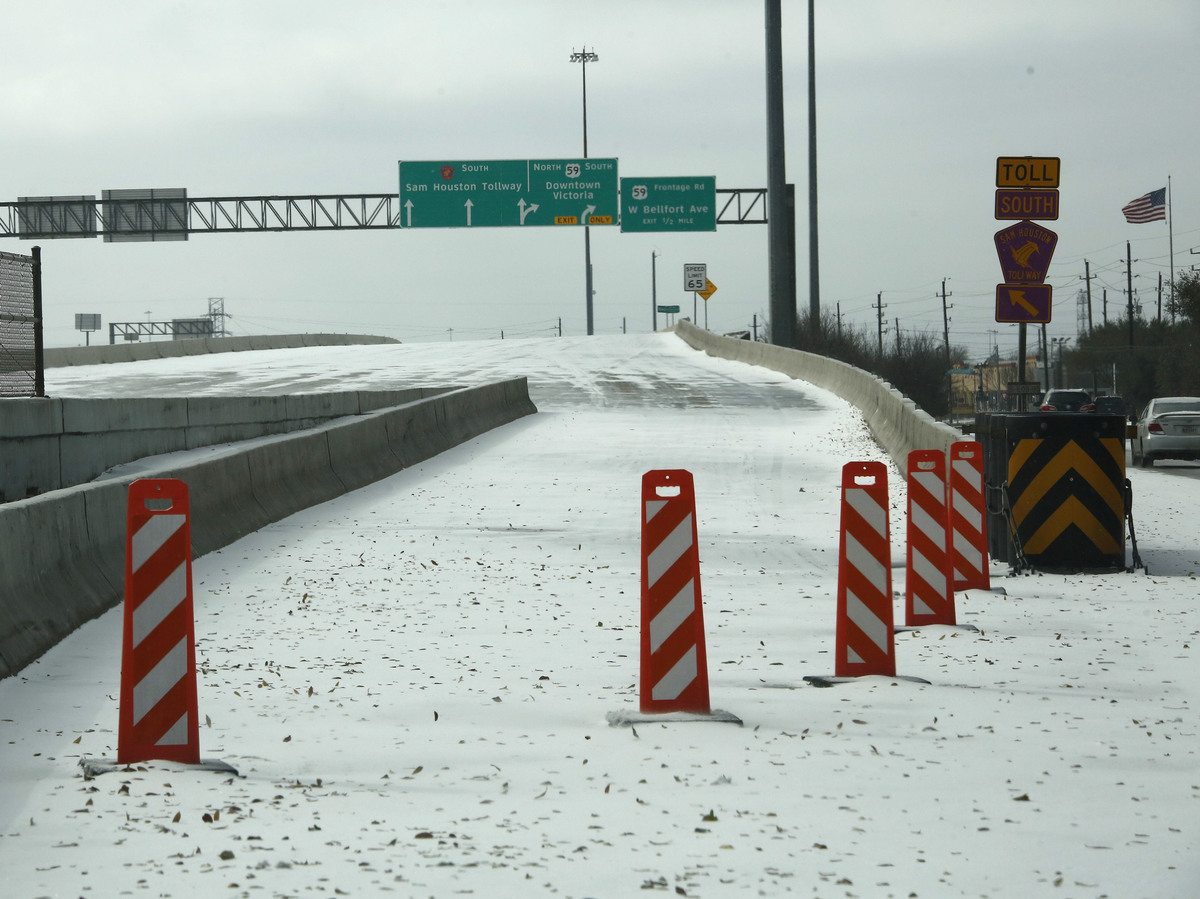 A highway on-ramp in Houston is closed due to snow and ice on Monday. Frigid temperatures, icy roads and power outages caused by a major winter storm have interfered with COVID-19 vaccine distribution in Texas and several other states.

The massive storm sweeping across the country isn’t only bringing subzero temperatures and widespread power outages to much of the U.S., it’s also putting a freeze on COVID-19 vaccine distribution in several states and cities.

In Missouri, Gov. Mike Parson announced on Monday that all state-run mass vaccination events scheduled for this week are canceled, citing safety concerns brought on by the extreme weather.

“Missouri is experiencing severe winter weather that makes driving dangerous and threatens the health and safety of anyone exposed to the cold. These conditions will also likely delay some vaccine shipments,” Parson said. “We want to protect the safety of everyone involved in the mass vaccination events, from the patients being vaccinated to the volunteers who generously support these events.”

He emphasized that the cancellations will not change Missouri’s weekly regional vaccine allocations. All arriving vaccine shipments intended for this week’s events will be stored in Missouri State Highway Patrol regions across the state and redistributed to community hospitals with emergency generators, which can administer the vaccine according to the state’s tiers of eligibility.

The disruption also means those who were scheduled to receive their second dose of the Pfizer vaccine at this week’s events will have to wait. Citing the Centers for Disease Control and Prevention, Parson said the “slight delay” will not decrease the booster’s efficacy.

The CDC says the second dose can be administered up to six weeks, or 42 days, after the first.

Officials in New Hampshire said that all state-run vaccination sites will be closed on Tuesday as the storm heads north.

Vaccine candidates in Alabama are similarly facing delays, as many county health departments are closed on Tuesday or reducing their operating hours. The state’s public health department said it will “assure the opportunity” for people affected to get their second dose in the next two weeks, including by extending clinic hours as staffing permits.

And in Texas, where some 4.4 million customers remain without power, several cities have canceled vaccination appointments because of the winter weather.

They include San Antonio, which rescheduled all Monday and Tuesday appointments at the Alamodome, and Dallas, which suspended all vaccine operations at Fair Park through Wednesday.

And in Harris County, home to Houston, officials scrambled early Monday to administer some 5,000 vaccine doses after the facility storing them lost power.

Harris County Judge Lina Hidalgo explained at a Monday evening news conference that the health department building had been storing 8,430 Moderna vaccines when the power went out and its backup generator failed, meaning they could not be maintained at the proper temperature.

“We all know those vaccines need to be kept in cold storage, so we got to work under the mission to avoid losing those vaccines with the loss of power,” she said.

Hidalgo said officials quickly put together a plan to “allocate and salvage” the doses before they went bad, by getting them to locations where there were already large numbers of people, including trained medical professionals who could administer the vaccines, and without requiring people to drive in dangerous conditions.

They were ultimately able to administer a total of 5,410 doses to three hospitals, the Harris County Jail and Rice University. The remaining doses were saved, Hidalgo said, after Moderna told officials directly that they could be safely re-refrigerated and distributed later.

Icy roads and frigid temperatures are also interfering with the transportation of vaccine shipments to different parts of the country, according to officials in several states.

Officials in Corpus Christi, Texas, said that the Corpus Christi-Nueces County Public Health District was notified by the state that it would not receive its allocated first dose vaccines until Wednesday at the earliest, and that the week’s vaccination clinics are “being contemplated” for Saturday and Sunday.

The director of the Florida Division of Emergency Management said the state had been informed that the storm was delaying its Monday-Tuesday shipment of vaccines, according to the Tallahassee Democrat.

Meanwhile, health officials in Nevada announced on Monday that the state had learned the arrival of some vaccine deliveries could be delayed this week because of the storm.

“Our team is monitoring closely & working with health districts & pharmacies that may be affected,” they tweeted. “We ask Nevadans to continue to be patient at this time.”

In Kentucky, where regional vaccination sites first closed last week in response to an ice storm, Gov. Andy Beshear called the delays “unfortunate” but said he was not concerned about their long-term impact on the state’s vaccine distribution efforts because he expects supply to increase, reports member station WFPL.

“We’re hoping what we’re getting right now is a trickle compared to what we will get late spring and moving into the summer,” Beshear said.

The National Weather Service says this storm will bring ice and snow to the Northeast before exiting off the coast, while another major storm emerging in the Southern Plains is set to wallop the mid-South again on Wednesday.