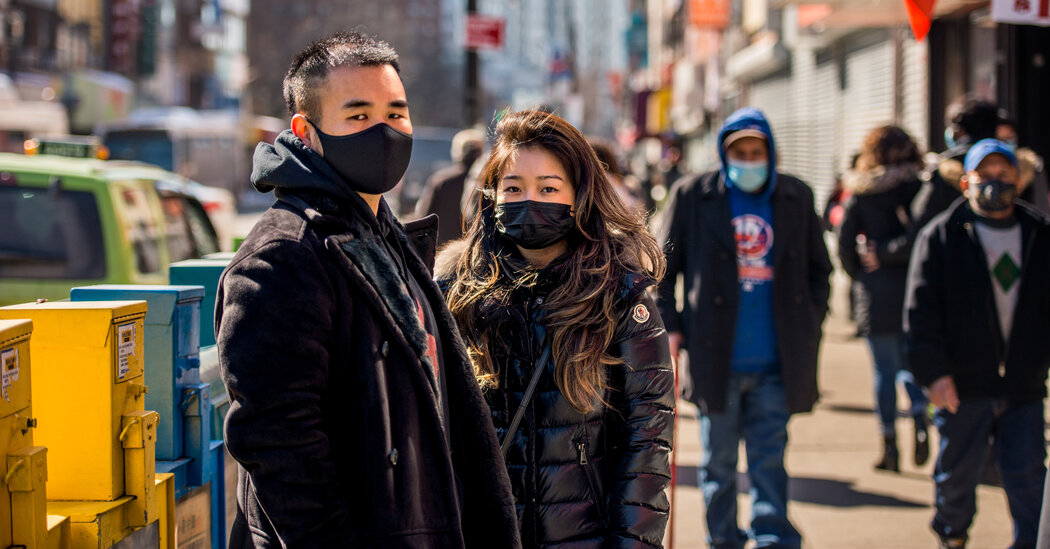 Maggie Cheng could stand to watch the video only once.

“I’ve never cried like that before,” Ms. Cheng said, describing her reaction to security footage that showed her mother being shoved to the ground last week on a crowded street in Flushing, Queens. “To see my mother get thrown like that, she looks like a feather. She looks like a rag doll.”

The attack on Ms. Cheng’s mother, which was highlighted by celebrities and gained widespread attention on social media, was one of four against Asian-American women in New York City that day. Taken together, they stoked fears that the wave of racism and violence that has targeted Asian-Americans during the pandemic was surging again in New York. Those concerns intensified after a man of Asian descent was stabbed Thursday night near Chinatown.

The number of hate crimes with Asian-American victims reported to the New York Police Department jumped to 28 in 2020, from just three the previous year, though activists and police officials say many additional incidents were not classified as hate crimes or went unreported.

Asian-Americans are grappling with the anxiety, fear and anger brought on by the attacks, which activists and elected officials say were fueled early in the pandemic by former President Donald J. Trump, who frequently used racist language to refer to the coronavirus.

In New York City, where Asian-Americans make up an estimated 16 percent of the population, the violence has terrified many.

“The attacks are random, and they are fast and furious,” said Jo-Ann Yoo, executive director of the Asian American Federation, a nonprofit network of community groups. “It has stoked a lot of fear and paranoia. People are not leaving their homes.”

The xenophobia and violence is compounded by the economic fallout of the pandemic and fears of the virus, which dealt a severe blow to New York’s Asian-American communities.

Many of the attacks do not result in hate crime charges, because the police need evidence that identity was the motivating factor, like an audible racial slur, a self-incriminating statement or a history of racist behavior by the attacker.

So far this year, three attacks on people of Asian descent have led to hate crime charges in New York. The most recent came on Thursday, when a 36-year-old man was stabbed near the federal courthouse in Lower Manhattan and taken to the hospital in critical condition, the police said. A suspect was arrested that evening and later charged with second-degree attempted murder as a hate crime, as well as assault, forgery and criminal possession of a weapon.

A Police Department spokesman said the motives in last week’s attacks, including the one on Ms. Cheng’s mother, were unclear and that they were not currently being investigated as hate crimes.

Leaders who have pressed elected officials and the police to confront the issue say the response so far has felt sluggish.

“I’m really angry,” Ms. Yoo said. “I’ve been asking for something, some kind of a proactive response from City Hall.”

Mayor Bill de Blasio said this week that the city was working to increase communication with community leaders, creating a website to help people report and respond to attacks, and focusing subway patrols on possible bias crimes. He also pointed to the Asian Hate Crime Task Force the department formed late last year.

“If you dare to raise your hand against a member of our Asian communities, you will suffer the consequences,” Mr. de Blasio said at a news conference.

Deputy Inspector Stewart Loo oversees the task force, which is composed of 25 volunteer detectives who speak 10 languages. He said it was designed to encourage Asian-Americans who are reluctant to cooperate with the police.

“The sentiment within the Asian-American community is that the police either don’t care or are not doing enough,” he said.

The N.Y.P.D. said it made arrests in 18 hate crimes involving Asian-American victims last year, and the cases are still pending.

But many Asian-Americans feel that their complaints are not being taken seriously by the police and prosecutors, said Chris Kwok, a board member for the Asian American Bar Association of New York.

Several highly publicized incidents early in the pandemic were not handled as hate crimes, Mr. Kwok said. If they had been, it “would have sent a signal that this was unacceptable and that if you were going to target Asian-Americans, there would be consequences,” he said.

In April, a man doused a 39-year-old woman with a caustic chemical as she took the trash out in front of her home in Brooklyn, badly burning her face, hands and neck. In July, two men lit an 89-year-old woman on fire near her Brooklyn home, after which hundreds of New Yorkers marched in protest. Neither was classified as a hate crime.

The increase in attacks in the city mirrors a trend across the United States. Stop AAPI Hate, an initiative that tracks violence and harassment against Asian-Americans and Pacific Islanders, recorded more than 3,000 reported incidents from the start of the pandemic, said Russell Jeung, one of the group’s leaders and chair of the Asian American Studies Department at San Francisco State University. Of those, at least 260 were in New York City.

These attacks have lasting effects, said Kellina Craig-Henderson, who works for the National Science Foundation and has studied the psychological impact of hate crimes. She said that people targeted because of their race and ethnicity can suffer ailments like post-traumatic stress disorder, often more acutely than victims of other crimes.

She added that hate crimes reverberate through communities and can further marginalize them.

“It sends a message to others that they could be next,” she said.

Several Asian-Americans who were victims of attacks in New York last year and reported them to the police said the scars were lasting.

Crisanna Tang was riding the subway to work one July morning when a maskless man spat on her and yelled that Chinese people had caused the virus. None of the other passengers intervened, Ms. Tang said.

“I was like, ‘Oh my god, I can’t believe this is actually happening to me,’” said Ms. Tang, 31, a pathologists’ assistant at Jacobi Medical Center.

Now, Ms. Tang is hypervigilant. She started taking the express bus, which costs more than the subway. She stopped wearing a face shield to attract less attention. She carries pepper spray in her bag.

“I just wish these incidents would stop,” Ms. Tang said. “I am worried about the elderly community. I am really worried not enough is being done for them.”

Mimi Lau said strangers shouted racist slurs and threatened her physical safety twice last year, once on the D train and once outside the mochi shop she owns in Manhattan’s East Village.

Yen Yen Pong, 37, bought pepper spray after a maskless stranger accosted her last April in Queens, yelling racist remarks about the virus. After Ms. Pong tried to take a photograph of him, he snatched her cellphone and shattered it on the pavement.

“Number one, I am Asian. Number two, I am a woman,” Ms. Pong said. “What makes me a better target than that?”

The Asian American Bar Association of New York recently issued recommendations for ways to address the attacks, including clearer reporting mechanisms for victims and formalizing the Asian Hate Crime Task Force as a funded unit.

In September, more than 25 community groups condemned the task force, in part because of the effects that overpolicing can have on people of color, including Asian-Americans, and because such a unit fails to address the root causes of anti-Asian racism.

Even with the task force working to expand outreach, details of attacks and harassment may never reach the authorities. Activists say that many incidents go unreported, in part because of the stigma attached to them.

Sam Cheng, Maggie Cheng’s brother, said their mother spent hours in the hospital, where she got stitches for a deep gash in her forehead, and that she did not initially want to file a police report.

Two days after the attack, the police arrested Patrick Mateo, 47. He was charged with assault and harassment, and later released.

The New York Times reached out to Mr. Mateo, who said in several text messages that he began to argue with the woman after she got too close to him in line at a bakery and that she later sprayed him with mace.

He wrote that he had told the woman “you are in america … NOT CHINA! Please give me space with coronavirus.”

Mr. Cheng said his mother’s memory of the incident was foggy, possibly because of the blow to her head, but that she did carry pepper spray and that she had taken it out during the encounter.

The Chengs urged people not to retaliate against Mr. Mateo. Ms. Cheng said her mother was eager to move on and returned to her routine the day after the attack.

“She didn’t want to live in fear or stay at home,” Ms. Cheng said.