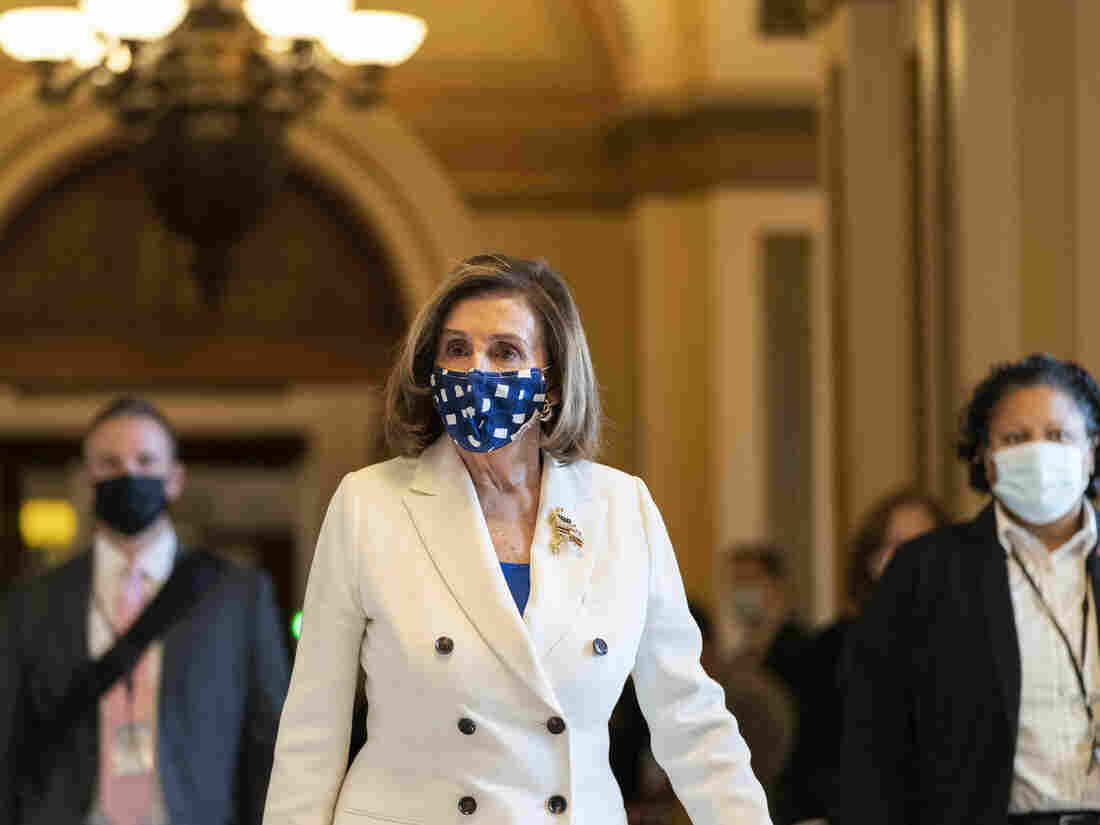 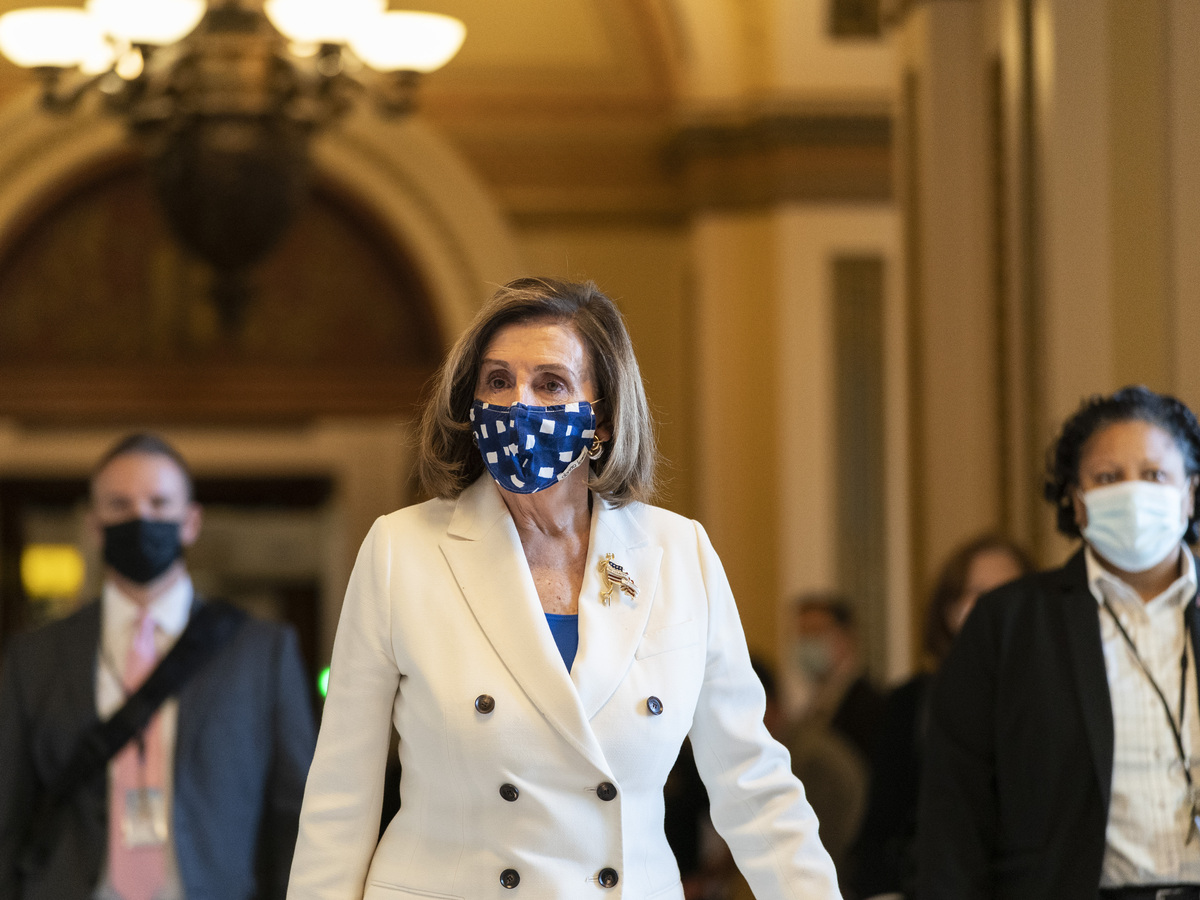 House Speaker Nancy Pelosi of California walks from the House floor during the vote on the $1.9 trillion COVID-19 relief bill Wednesday. Despite Republican criticism, Pelosi insists the bill is “coronavirus-centric.”

House lawmakers Wednesday gave final approval to President Biden’s $1.9 trillion coronavirus relief package, sending the legislation to his desk for his signature. The White House says Biden plans to sign it on Friday.

“This legislation is about giving the backbone of this nation – the essential workers, the working people who built this country, the people who keep this country going – a fighting chance,” Biden said in a statement Wednesday.

The House voted 220-211 with no Republicans voting in favor of the bill, despite calls for bipartisan support from House Speaker Nancy Pelosi, D-Calif., and other Democratic leaders.

One Democrat, Rep. Jared Golden, voted against the bill, citing concerns over changes to the legislation from the Senate.

“Although I support the Senate’s effort to reduce the number of wealthier households that will receive stimulus checks, they did not go far enough, and other changes — like removing the minimum wage increase or providing a lower unemployment benefit — undermined policies that I support,” Golden said in a statement.

The bill will direct a new round of aid to Americans — in the form of direct payments, extended unemployment benefits, an expanded child tax credit and more — almost a year after the pandemic first upended daily life in the United States.

Biden said in remarks on Saturday at the White House that funding for the American Rescue Plan will “get the country in a place to get back to normal.”

“This plan puts us on a path to beating the virus,” he said, following the Senate’s vote. “This plan gives those families who are struggling the most the help and the breathing room they need to get through this moment.”

Biden also vowed to get the direct payments of up to $1,400 out the door starting “this month.”

The House passed a similar version of the plan last month but had to approve changes to the legislation made by the Senate. One key difference is that the Senate’s version of the bill doesn’t include an increase to the minimum wage, a provision that was ruled out by the nonpartisan Senate parliamentarian.

The final legislation also includes an extension of federal unemployment benefits through Sept. 6, but the payments will remain at $300 per week rather than the $400 weekly benefits originally approved by the House.

The Senate also tightened the caps for direct payments, narrowing who would qualify for them.

Beyond support for individuals and families — including an expanded child tax credit, the bill allocates billions of dollars to schools and to the distribution of COVID-19 vaccines, testing and supplies. (Read more about what’s in the bill here.)

Though Republicans have largely opposed the plan since Biden introduced it in January, the budget reconciliation process allowed Democrats to push the bill forward without support from across the aisle.

“The Senate has never spent $2 trillion in a more haphazard way or through a less rigorous process,” said Minority Leader Mitch McConnell before the Senate voted on Saturday.

Ahead of the vote on Wednesday, Rep. Jason Smith, R-Mo., reiterated Republican opposition to provisions they consider “unrelated” to the pandemic.

“It’s the wrong plan at the wrong time. If this bill was about direct payments to people and putting shots in the arms and vaccines, you would have strong bipartisan support across this Congress, across this country,” he told NPR.

A better plan, he argued, would include “targeted and timely” direct payments.

Democrats counter that a broader approach to the economic crisis, with sweeping plans to address poverty, is in fact what the country needs — and what they say their constituents want.

Pelosi insisted Wednesday on the House floor that the package was “coronavirus-centric.” Furthermore, referring to the projected impact of the expanded child tax credit, she said, “How do you say no to lifting 50% of impoverished children in America out of poverty?”

The White House and congressional Democrats point to public opinion polls showing overwhelming support for the legislation, including the backing in some surveys from a majority of Republicans. While no GOP lawmakers in Congress voted for it, Democrats point out that some Republican state and local government officials are pressing for the aid.

Biden is expected to sign the bill swiftly; the current enhanced federal unemployment benefits expire Sunday. He’ll also deliver the first prime-time address of his term Thursday to mark the one-year anniversary of the pandemic.