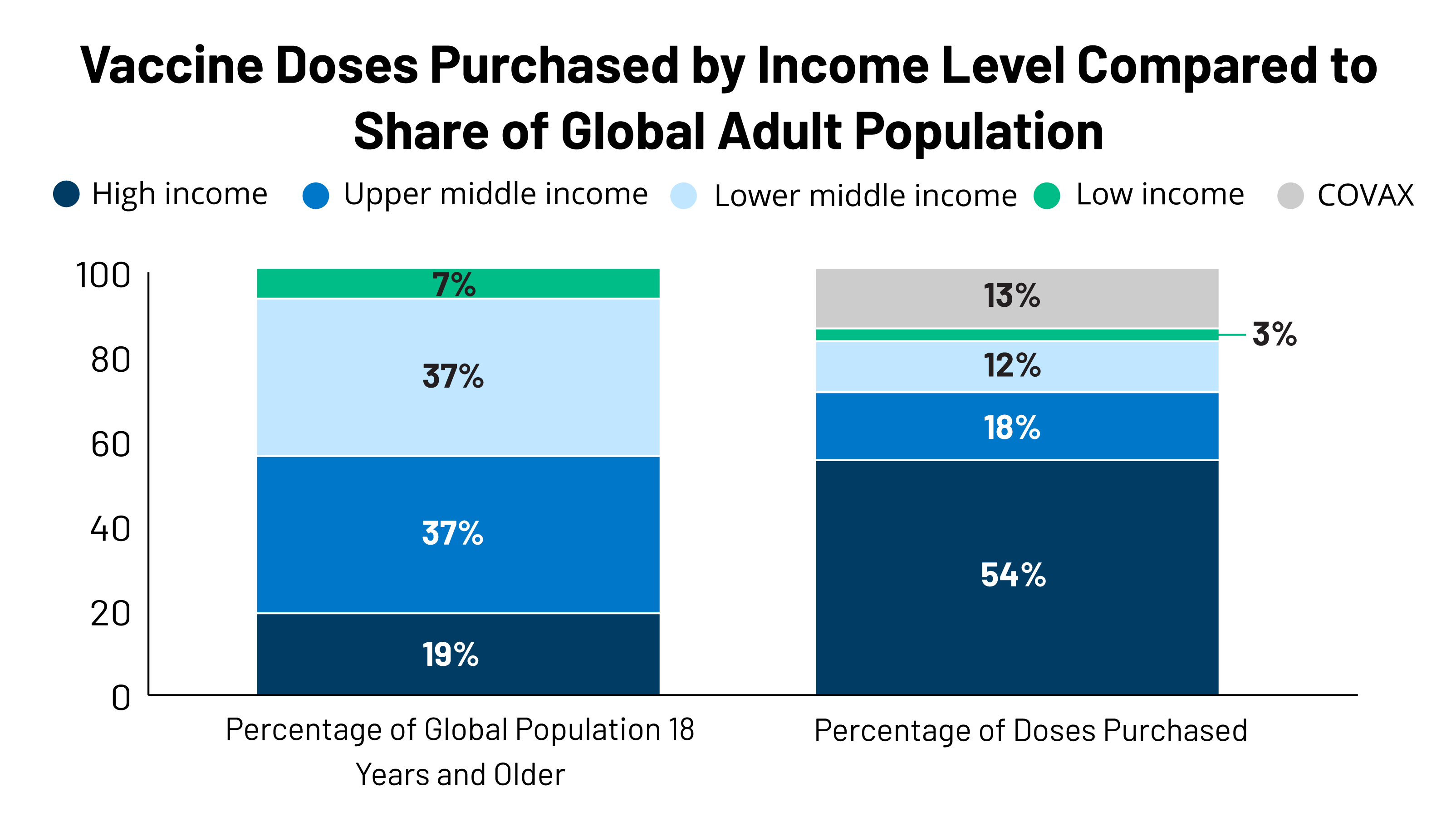 Ensuring widespread global access to COVID-19 vaccines, which is necessary for preventing cases and deaths and contributing to global population immunity, is a critical challenge and one that could threaten the ability to control the pandemic. Despite efforts to address vaccine access, most notably through the creation of COVAX, which aims to support the development and delivery of COVID-19 vaccines with a particular focus on assisting low- and middle-income countries, significant disparities remain. The latest data from the Duke Global Health Innovation Center Launch and Scale Speedometer, which monitors COVID-19 vaccine purchases, finds that high-income countries already own more than half of all global doses purchased, and it is estimated that there will not be enough vaccine doses to cover the world’s population until at least 2023.

To further examine the current global distribution of COVID-19 vaccine doses, we used data from the Duke Launch and Scale Speedometer to calculate the share of doses purchased by country income group compared to their share of the global adult population (focusing on adults, ages 18+, because most COVID-19 vaccines are thus far only available for the adult population). In addition, we calculated potential vaccine coverage rates – that is, the share of the adult population that could be fully vaccinated – by country income group. To do so, we reapportioned doses secured through regional agreements to their respective country recipients and added these to individual country totals where bilateral agreements were also in place. While it is not possible to allocate most COVAX doses purchased to individual countries at this time, since COVAX has yet to release its full distribution plan, we did assess how allocating  all COVAX doses to low- and middle-income countries (LMICs) would affect these distributions (see Methodology for more detail). Ultimately, we find that without redistribution of doses already purchased by high-income countries (through donations or other means) and/or increased support for manufacturing or production of additional doses, more than four in ten (41%) adults in the world will not be able to be vaccinated, even after allocating all COVAX doses to LMICs.

The disparity is even more pronounced when looking at the share who could be vaccinated. While enough vaccine doses have been purchased to cover 80% of the adult population, high-income countries own enough doses to vaccinate more than twice their populations while LMICs can only cover one-third.

Providing all COVAX doses to LMICs could help but would still leave vaccines out of reach for most of the global population. COVAX, which currently accounts for 13% (1.12 billion) of the total number of global doses purchased, has not yet finalized the distribution plan for its full supply, though most doses are expected to be distributed to LMICs. We looked at what would happen to global distribution, relative to population and to vaccine coverage, if all 1.12 billion COVAX doses were provided to LMICs (which is not going to be the case since some will go to high-income countries). While this would result in the share of doses purchased for LMICs increasing from 33% to 46%, it would still be well below their share of the global adult population (81%) (see Figure 1b). Moreover, even with the COVAX doses, less than half (49%) of the adult population in LMICs would be able to be vaccinated (see Figure 2b).

The disparity between vaccines purchased and country income level is significant, but could be addressed in large part through redistribution of doses, as some high-income countries have said they would do. However, such a strategy is highly dependent on the as-of-yet unknown outcomes of several vaccine candidate trials or a significant increase in the manufacturing and production of already authorized vaccines. This analysis demonstrates the significant disparity in vaccine access across much of the world, at least of doses purchased to date. While high-income countries have secured enough doses for more than twice their adult population, LMICs currently have only enough doses to vaccinate just a third, or, if all COVAX doses were allocated to them, still less than a half. Although there are currently enough purchased doses to vaccinate 80% of the global adult population, unless these doses are redistributed, huge inequities in vaccine distribution will persist, presenting a major challenge to achieving global population immunity. Some high-income countries have indicated that they will donate their excess doses, including France, Norway, the U.K., and the U.S. government, which has said it will do so only after it has vaccinated the U.S. population. Still, even if such donations were to occur, their ability to fully address these disparities is in part dependent on the success of some vaccine candidates still in clinical trials or the ability to support the increased manufacturing of or production capacity for already successful vaccine products.