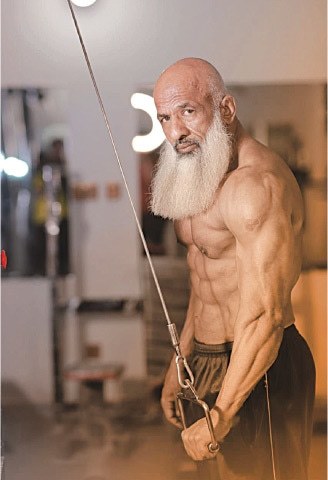 “Good health is a gift from God. With Him showering His blessings on me, and with me down here not taking anything for granted and working hard to stay fit, even at 60, I don’t see why I won’t be able to keep winning in bodybuilding competitions even when I am 100 years old,” laughs Ustad Abdul Waheed. At 60 years of age, he sports a chiseled body any young bodybuilder would die for.

Just before Ramazan, Ustad Abdul Waheed won the Mr Pakistan title. A few months earlier, he had won the Mr Punjab title as well. He has won a slew of other medals, mostly gold and a few silvers, along with titles such as Mr Lahore. He has his eye on the Mr Asia title now. “I believe the competition is circled in for winter, in Bangalore, India, if my information is correct,” he says. “I want to make a name for my country,” he adds.

Growing up in Batapur along the Bambawali-Ravi-Bedian (BRB) Canal, where he still resides, the young Abdul Waheed was drawn to bodybuilding as a hobby at first. “I started building up my body at 16,” he says. “But at the time, I had no interest in taking part in competitions. I only liked to go to the gym and lift weights. The competitions came later, when my students got after me to enter myself. That was 20 years ago,” he smiles.

The students he is referring to are the young men he coaches. Having spent years as a bodybuilding coach at various private gyms, he was finally able to open his own gym — called the New Body Grace Gym — in partnership with a friend. That’s where he now trains himself. And that’s where he trains others, too.

Every day these days, it is still dark when Ustad Waheed sits down for sehri with his family before saying fajr prayers and getting ready to head out to his gym and training centre on the Grand Trunk Road.

Ustad Abdul Waheed is 60 years old, and yet he easily wins bodybuilding competitions against men who are half or even less than half his age

I ask him if he consumes entire goats and gallons of milk for sehri or breakfast. The bodybuilder chuckles and shakes his head. “I am not a pehelwan or wrestler. We are more into building a body and physique that we can show off. It is about building muscle, not mass. So our intake mostly includes minced meat, pulses, porridge, milk, yoghurt, eggs, salads and fruits or dried fruits. These also we break into six to seven meals a day, with proper gaps for rest and exercise in between,” he explains.

While coaching young men at the gym, ‘Ustad’, as he is lovingly called along with several other names — including ‘Baba’, because of his white beard — he looks to involve more and more youth into healthy activity.

“The food isn’t cheap. Neither is the training and equipment. Normal club memberships can be somewhere in the vicinity of 40,000 rupees a month. But in my gym, I let anyone who wants to train there do it for whatever they can afford to pay me,” he says.

“I have always believed in diverting our youth away from bad habits such as drugs and alcohol. I’d rather they spend money on something positive and healthy. So I accept whatever they can pay me.

“The gym and equipment, the weights and the machines, are at their disposal under my supervision, but the food I tell them to arrange themselves. I am not a rich man. Honestly, had I been rich, I would have also arranged for a healthy diet for my students, but that I am unable to do so at this point. I wish I had some good sponsors,” he says.

Just before Ramazan, Ustad Abdul Waheed won the Mr Pakistan title. A few months earlier, he had won the Mr Punjab title as well. He has won a slew of other medals, mostly gold and a few silvers, along with titles such as Mr Lahore. He has his eye on the Mr Asia title now. “I believe the competition is circled in for winter, in Bangalore, India, if my information is correct,” he says. “I want to make a name for my country.”

Asked if the bodybuilding competitions have any age limitations, Ustad Waheed explains: “There are some open-age competitions. I usually take part in those or, if there are classes and categories, I take part in the 50 years-and-above category.

“I was crowned Mr Pakistan a few weeks ago, in fact just before Ramazan, in a big competition in Karachi. It was an open-age competition. And when I came on to the stage there, I overheard some people say that my six-pack abs were visible even before I tried striking a pose,” he laughs, adding that he has earned much respect in bodybuilding circles in the last 20 years since he started competing.

“Still, it has not entirely been a cakewalk. There have also been times when people have had issues with my taking part, or registering for a competition. Some months ago, I had bagged the Mr Punjab title in a competition. The judges had all ruled in my favour before someone said that I should not be competing. That was when I just left the stage and went home. I turned down the title,” he says.

“I didn’t enter any competition for sometime after that. I just felt disheartened. But then something happened, which made me change my mind,” he says.

That something was an unfortunate accident.

“I am blessed with a large family,” recounts Ustad Waheed. “I have one son and two daughters, and my son also has three daughters. My 35-year-old son, Habib, was in a bad qingqi accident. He broke the ribs in his back and has been on bed rest for months now. Now suddenly, I find myself the only breadwinner of my family. Doctors are hopeful of a complete recovery for Habib, but it will take time,” he shares.

“Before his accident, my son was in the sewing machines business. Now, as a father and grandfather, it is my responsibility to take care of my family, and I will, too. So as my son recuperates, I have pulled up my socks and started taking part in competitions again, along with running the gym,” he says.

Living up to life’s responsibilities often takes far more hard work than building up muscles in a body. But Ustad Abdul Waheed is certainly equal to both tasks.

The writer is a member of staff She tweets @HasanShazia