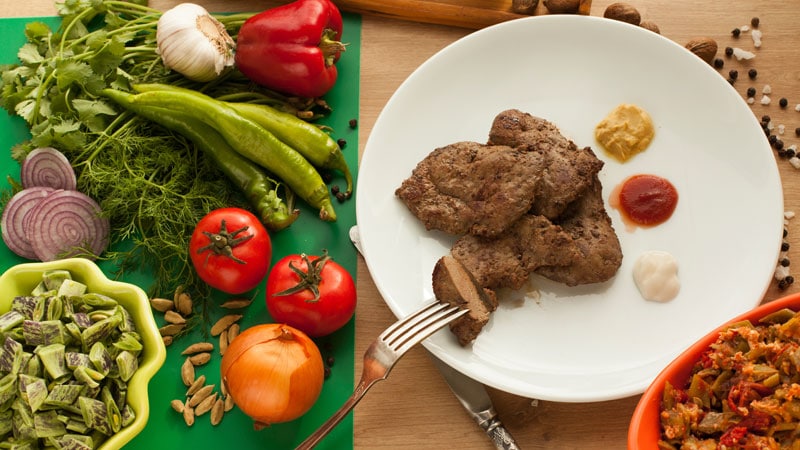 Vegetarians have more favorable levels of a number of biomarkers including cardiovascular-linked ones — total cholesterol, low-density lipoprotein (LDL) cholesterol, and apolipoprotein A and B — than meat-eaters, shows the largest study of its kind to date.

Results of the cross-sectional, observational study of 178,000 participants were presented as an electronic poster at this year’s online European Congress on Obesity (ECO), by Jirapitcha Boonpor of the Institute of Cardiovascular & Medical Sciences, University of Glasgow, UK.

“We found that the health benefits of becoming a vegetarian were independent of adiposity and other sociodemographic and lifestyle-related confounding factors,” senior author Carlos Celis-Morales, PhD, also from the University of Glasgow, told Medscape Medical News in an interview.

Vegetarian diets have recently become much more popular, but there is insufficient information about the health benefits. Prior reports of associations between biomarkers and a vegetarian diet were unclear, including evidence of any metabolic benefits, noted Celis-Morales.

Importantly, participants in the study had followed a vegetarian or meat-eater diet for at least 5 years before their biomarkers in blood and urine were assessed.

“If you modify your diet, then, 2 weeks later, you can see changes in some metabolic markers, but changes in markers of cardiovascular disease will take 5 to 10 years,” he explained.

Asked to comment on the findings, John C. Mathers, PhD, noted that they clearly confirm the importance of not reading any biomarker result in isolation.

He says a vegetarian diet can be nourishing but cautioned that “just because someone excludes meat from their diet does not mean necessarily that they will be eating a healthy diet.”

Also reflecting on the results, Jose Lara Gallegos, PhD, senior lecturer in human nutrition at Northumbria University, UK, said they support previous evidence from large studies such as the European Prospective Investigation into Cancer and Nutrition (EPIC), which showed that a vegetarian diet is associated with a lower risk of heart disease.

“Other, less restrictive dietary patterns, such as a Mediterranean diet, are also associated with…health benefits,” he observed.

“Specifically, we wanted to know if vegetarians were healthier because they are generally leaner and lead healthier lives, or whether their diet specifically was responsible for their improved metabolic and cardiovascular health,” Celis-Morales explained.

Data were included from 177,723 healthy participants from the UK Biobank study who were aged 37-73 years and had reported no major dietary changes over the last 5 years. In total, 4111 participants were self-reported vegetarians who followed a diet without red meat, poultry, or fish, and 166,516 participants were meat-eaters.

Nineteen biomarkers related to diabetes, hypertension, cardiovascular diseases, cancer, and liver and renal function were included, and the associations between vegetarian diet and biomarkers, compared with meat-eaters, were examined.

However, the researchers found that, compared with meat-eaters, vegetarians had significantly higher concentrations of some unhealthy biomarkers, including triglycerides (15% higher) and cystatin-C (4% higher), and lower levels of some beneficial biomarkers including high-density lipoprotein (HDL) cholesterol (5% lower), vitamin D (635% lower), and calcium (0.7% lower).

No associations were found for A1c, systolic blood pressure, and aminotransferase.

“Some biomarkers, for example urate, were very low in vegetarians, and this served to verify our results because we expected meat-eaters to have higher levels of urate,” remarked Celis-Morales.

Many people, whether vegetarians or meat-eaters, follow short-term diets, for example, the Atkins or the 5:2 diet, and often lack continuity switching from one diet to the next, or back to regular eating.

“They are healthy, but they do not commit for long enough to make a difference to metabolic markers or potentially long-term health. In contrast, vegetarians are usually fully committed but the reasons behind this commitment might be a concern for the environment or animal welfare, for example,” Celis-Morales pointed out.

However, he added that many vegetarians replace the meat in their diet with unhealthy alternatives. “They often eat too much pasta or potatoes, or other high energy food with low nutritional value.”

Having identified metabolic markers specific to long-term vegetarian diets, Celis-Morales wanted to know what happens to vegetarians’ long-term cardiovascular health. He analyzed and published these outcomes in a separate study published in December 2020.

“Over 9 years of follow-up, we have found that vegetarians have a lower risk in terms of myocardial infarction in the long-term, as well as other cardiovascular disease,” he reported.

Asked whether there was an optimum age or time in life to become a vegetarian to improve health, Celis-Morales explained that the healthier you are, the less likely you will reap the health benefits of dietary changes — for example to being a vegetarian.

“It is more likely that those people who have unhealthy lifestyle risk factors, such as smoking, and high consumption of high-energy foods or processed meat are more likely to see positive health effects,” he said.

Lifestyle changes to improve cardiovascular outcomes are usually more likely to be required at 40 or 50 years old than at younger ages. He also noted that metabolic markers tend to show clear improvement at around 3 months of adopting a particular diet but improvements in disease outcomes take a lot longer to become evident.

Celis-Morales and his team are currently conducting a further analysis to understand if the vegetarian diet is also associated with a lower risk of cancer, depression, and dementia compared with meat-eaters.

Celis-Morales, Mathers, and Gallegos have reported no relevant financial relationships.