Lower levels of bile acids, which are made when the body breaks down cholesterol, are linked to a higher risk of dementia among men, according to a recent NIA study. The findings were published in PLOS Medicine on May 27. 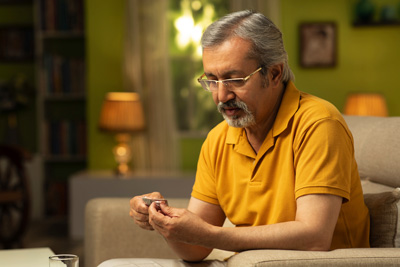 High blood cholesterol can raise the risk of certain types of dementia, such as Alzheimer’s disease and vascular dementia. However, cholesterol does not enter the brain, and researchers are unsure how these conditions are linked. In the new study, a research team led by Madhav Thambisetty, M.D., Ph.D, of NIA’s Clinical and Translational Neuroscience Section in the Laboratory of Behavioral Neuroscience examined whether bile acids that arise from breaking down cholesterol and that do enter the brain, were related to the risk of dementia.

The researchers found that people who had lower blood levels of bile acids were more likely to have higher levels of amyloid protein in the brain, faster brain shrinkage, and more damage to the brain’s white matter. This difference was more noticeable in men than in women. Also, men who used medicines that reduce bile acid levels in the blood had a higher risk of vascular dementia.

The study also found that cholesterol metabolism may be regulated differently in men and in women and that bile acids may influence dementia risk, particularly in men. Low levels of bile acids may disrupt normal signaling in the brain, raising the risk of some types of dementia.

“To further extend these findings, we are now testing whether approved drugs for other diseases that may correct bile acid signaling abnormalities in the brain could be novel treatments for Alzheimer’s disease and related dementias,” said Dr. Thambisetty. “These analyses are being pursued in the Drug Repurposing for Effective Alzheimer’s Medicines (DREAM) study.”