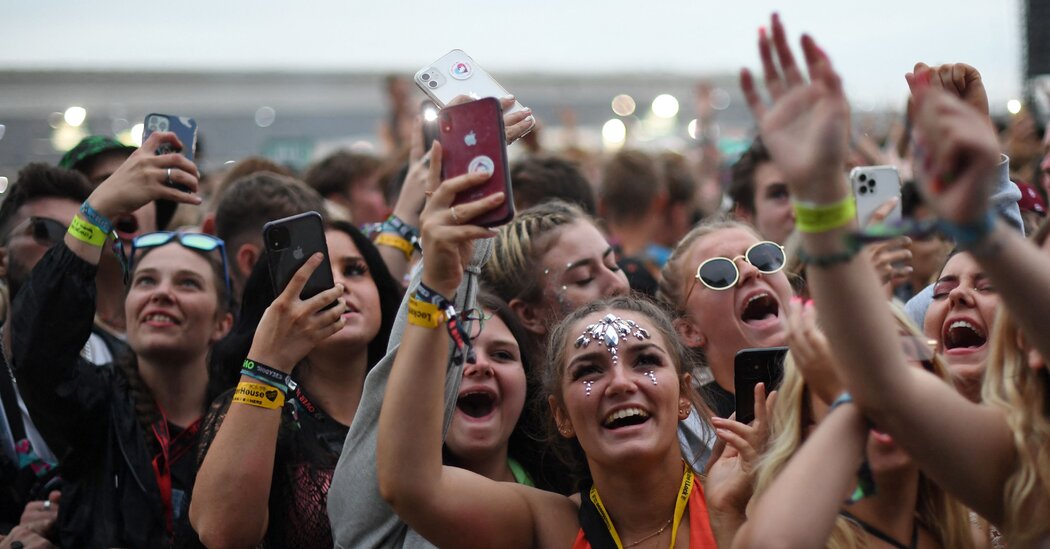 All of this at a time when Britain is reporting more than 30,000 new coronavirus cases a day, hospitals are coming under renewed strain, and preliminary data shows that the protection provided by the vaccines ebbs several months after the second dose.

Such is the strange new phase of Britain’s pandemic: The public has moved on, even if the virus has not. Given that Britain has been at the vanguard of so many previous coronavirus developments — from incubating variants to rolling out vaccines — experts say this could be a glimpse into the future for other countries.

“We don’t seem to care that we have these really high infection rates,” said Tim Spector, a professor of genetic epidemiology at King’s College London who has been leading a major study of Covid-19 symptoms. “It looks like we’re just accepting it now — that this is the price of freedom.”

Some of that equanimity may stem from the fact that Britain’s case rate, while high, has not yet risen anywhere near the level that government officials predicted when they lifted virtually all Covid restrictions last month. Some may be because so many Britons are vaccinated, fewer serious cases are being reported. And some of it may simply reflect fatigue, after 17 months of baleful headlines and stifling lockdowns.

“There’s a feeling that finally we can breathe; we can start trying to get back what we’ve lost,” said Devi Sridhar, the head of the global public health program at the University of Edinburgh. “It’s really difficult to ask people not to mix for a prolonged period, especially if there is no solution.”

With nearly 80 percent of the adult population fully vaccinated and the virus still circulating widely, Professor Sridhar said, Britain may be a model for other countries of “whether you can manage Covid in a sustainable way.” The evidence, she added, was inconclusive because Britain still faces critical challenges, like the reopening of schools on Wednesday.

That will almost certainly drive rates up further, particularly because Britain has resisted vaccinating children and younger teenagers. But epidemiologists are loath to make specific predictions because many were proved wrong in July when cases fell immediately after “Freedom Day,” when most restrictions were lifted.

New cases, in any event, are a less all-important metric than they once were, given that a much smaller percentage of those infected end up in the hospital than in the earlier stages of the pandemic. Almost 970 people were admitted to hospitals on Aug. 24, the most recent date for which data is available. That compares with 4,583 on Jan. 12, the peak of the last wave of infections.

Hospitalizations are rising, however, as is the fatality rate. Admissions last week were up 6.7 percent over the previous seven-day period, while deaths were up 12.3 percent, totaling 133 people on Saturday. With a backlog of patients with other illnesses, doctors say the National Health Service has little slack to cope with another influx of Covid victims.

“We’ve found rising numbers of cases, and we are under a lot of pressure again,” said Susan Jain, a specialist in anesthesia and intensive therapy who works in the intensive care unit at the Homerton University Hospital in East London. “All our Covid cases are unvaccinated by choice.”

The government of Prime Minister Boris Johnson, preoccupied with the chaotic military withdrawal from Afghanistan, has said little about the rising hospital numbers — or indeed about the pandemic at all — in recent weeks.

Relieved that the more gloomy predictions of spiraling cases have not materialized, the government argues that its strategy has been vindicated, with infections manageable because of the success of its vaccination campaign.

Nadhim Zahawi, the minister responsible for the vaccine rollout, compared the daily total of new cases with a similar moment in December. There were “**five times** the number of deaths we see today,” he wrote on Twitter, adding, “The vaccines are working.”

Still, critics said a death toll of around 100 a day should not be a source of pride. Moreover, they said, Britain’s early lead in the vaccination race meant that some protection from inoculations was starting to fade.

Britain’s Joint Committee on Vaccination and Immunization is likely to recommend booster shots soon, but they will initially be targeted at people with weakened immune systems.

Because Britain was one of the first big countries to do mass vaccination, Professor Scally said, it will be one of the first to experience the waning of immunity — an issue that has afflicted Israel, another early vaccine adopter. And despite its robust rollout, Britain has not reached the highest levels of population immunity because millions of young people remain unprotected.

The government’s policy on vaccinating younger teenagers is in flux, with no decision yet on whether to go ahead with a campaign to jab those 12 to 15, though Britain’s medical regulator has authorized a vaccine for this age group.

“The rollout of the vaccine program for adults has been incredibly impressive, but, for children and young people it has been frankly shambolic,” Camilla Kingdon, the president of the Royal College of Pediatrics and Child Health, said this month.

At the same time, public observance of measures to contain the spread of the virus seems to be slipping, a factor that some epidemiologists said accounted for Britain having a higher case rate than countries like France and Spain, where infections are now falling.

“I do wear masks indoors in public places,” said Philip Crossley, 69, walking on a street in the northern city of Bradford. “I noticed a lot of people don’t. Maybe that’s not a big problem, but they still could carry the virus.”

According to official survey data, about nine in 10 Britons said they had used face coverings within the past seven days when outside their homes. But anecdotal evidence suggests that compliance is much spottier, even on buses and subways in London, where wearing a mask is still compulsory.

After most restrictions were lifted, the transport police lost legal responsibility for enforcement of that rule. That left the task to transportation workers, who have been advised by one union to avoid confrontations with the public.

Understand Vaccine and Mask Mandates in the U.S.

“Our members have no enforcement powers, and it’s a bit of a farce, really,” the National Union of Rail, Maritime and Transport Workers said in a statement. “It’s an impossible situation, so our advice to our members is that they should not substitute for the police and should stay safe.”

Outside Downing Street, an anti-lockdown protester, Simon Parry, said he had never worn a mask on public transportation and had yet to be challenged.

“I get people looking at me like I want to kill my grandmother,” he conceded before adding that he thought the argument was moving his way and that one woman had recently shed her face mask after an exchange on the subway. “I make it my mission to get someone to take a mask off in the Tube,” he said.

One government minister, Greg Hands, tweeted a picture of himself on the subway wearing a mask, but complained that only about half of the passengers around him were doing likewise.

The office of London’s mayor, Sadiq Khan, said its data showed that 82 percent of passengers said they always wore face coverings on subway trains and buses, a solid number given the central government’s decision not to adopt a national mandate for face coverings on public transportation.

Other critics blame the government’s mixed messages, pointing to members of Mr. Johnson’s Conservative Party, many of whom abandoned their masks when they returned to a crowded chamber of Parliament recently to discuss Afghanistan. The government’s official position is that people should wear face coverings when confined indoors.

For some who objected to Britain’s recurring lockdowns, the return to normalcy was both welcome and overdue. But some said the tensions between freedom and security could easily resurface.

“The intensity has gone out of the debate, but it will come back if there is another wave,” said Jonathan Sumption, a former justice on Britain’s Supreme Court who has been an outspoken critic of the lockdowns.

“If it does come back,” he added, “we’ll then be in the position that even the vaccines don’t work. What is the exit route?”