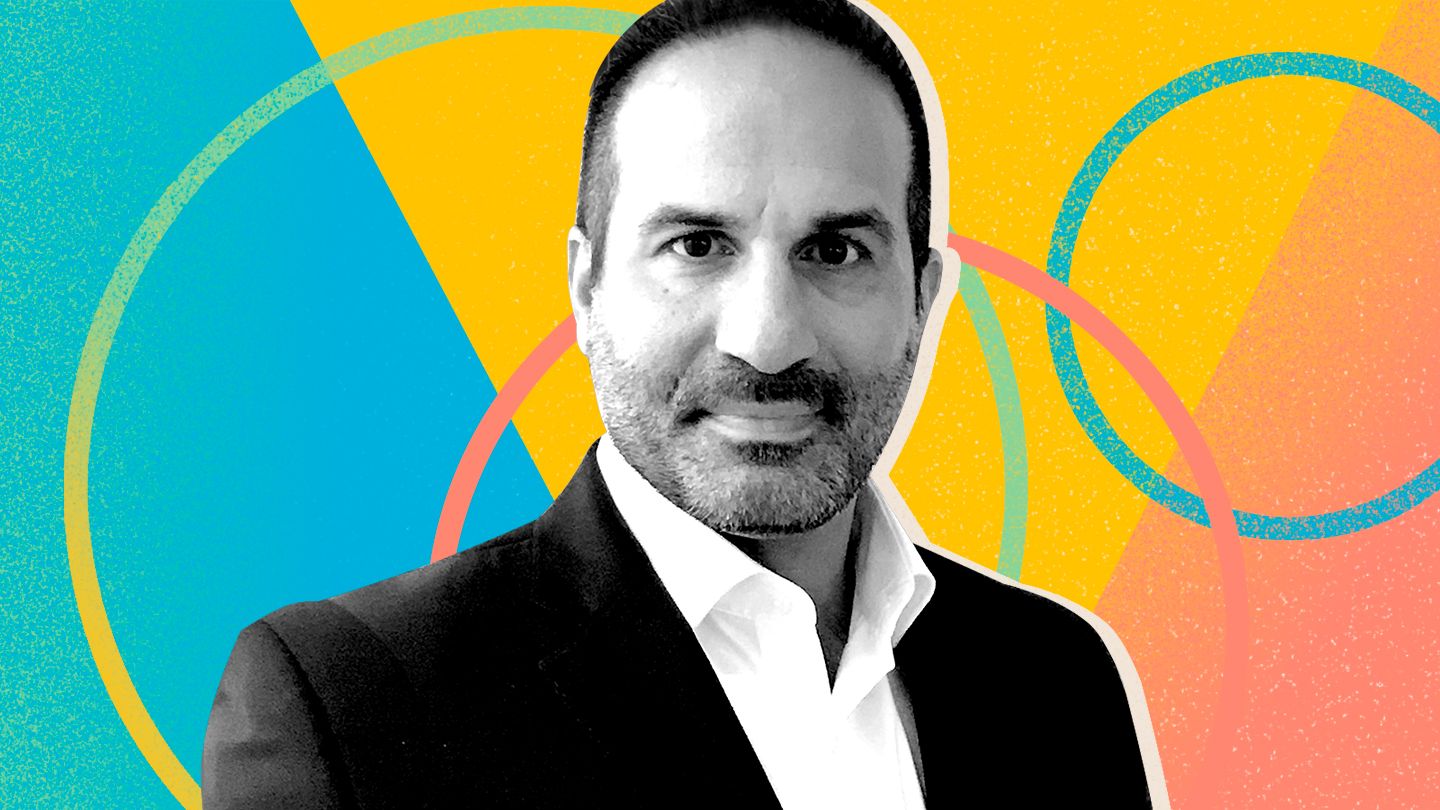 High cholesterol, or hyperlipidemia, runs in Dean Mastrojohn’s family. So when the Maywood, New Jersey, resident’s doctor encouraged him to make some lifestyle modifications to lower his risk, he took the guidance seriously.

“My doctor — the same one my parents have — kept a watchful eye on me and strongly suggested I try to lose some weight and exercise as much as possible to avoid medication,” says Mastrojohn, 47, a senior vice president at Goodfuse, a communications company in New York City. “I lost nearly 20 pounds and was exercising regularly — weight lifting, playing pickup basketball games, etc. — and was very fit.”

But after losing the recommended amount of weight to get his cholesterol in check, Mastrojohn received some surprising news: His LDL (“bad”) cholesterol and triglycerides had increased.

“It was right then that [my doctor] told me my condition was clearly genetic and he strongly suggested I begin taking a statin,” says Mastrojohn. “I’ll never forget it. I couldn’t believe it.”

For anyone who’s been diagnosed with high cholesterol or advised by a doctor to lower their numbers, the information can be overwhelming.

Cholesterol is a waxy substance in the blood that is used to build healthy cells, but when levels get too high — due to poor diet and other lifestyle habits, existing medical conditions, genetics (as in Mastrojohn’s case), or a combination of these factors — the risk of heart disease increases. That’s because high cholesterol causes fatty deposits to develop in the blood vessels, and these deposits constrict blood flow to the arteries over time and may suddenly break off to form a clot, causing a heart attack or stroke.

The Centers for Disease Control and Prevention recommends keeping your total cholesterol levels below 200 milligrams per deciliter (mg/dL).

“Cholesterol is the sum total of the LDL cholesterol, HDL (“good”) cholesterol, and triglycerides, calculated by a formula,” explains Robert Greenfield, MD, a board-certified cardiologist, lipidologist, and internist at MemorialCare Heart & Vascular Institute at Orange Coast Medical Center in Fountain Valley, California. “It’s important to know each component of the total cholesterol, as just knowing the total cholesterol — especially if it’s high — doesn’t tell you why it’s high, which is so important in planning a treatment strategy.”

How High Cholesterol Is Treated

Dr. Greenfield says there’s no one-size-fits-all approach to treating patients with high cholesterol. “I see high cholesterol all the time and every day,” he says, and each case needs to be evaluated individually.

A cholesterol treatment plan will take into account a variety of factors, including age, lifestyle, and personal and family history. In addition to diet, exercise, and weight, your doctor will consider other habits such as smoking and alcohol use.

A heart-healthy diet and exercise plan are always part of high cholesterol treatment, says Greenfield. “But if a person is high risk, such as with a prior cardiac history or risk factors like diabetes or high blood pressure, medication should be started along with lifestyle changes,” he says.

Mastrojohn was stunned when his doctor informed him that his cholesterol numbers didn’t reflect the effort he’d put into modifying his lifestyle. “After all that hard work, being told my condition was worse left me in shock,” he says.

He had followed the doctor’s orders to exercise as much as possible. Mastrojohn had started running and walking more and generally kept moving. “I was going to the gym regularly and had lost weight,” he explains. “I had always been athletic, from my grade-school years through college, and played multiple sports but was never terribly thin, truth be told — nor was I terribly overweight.”

Experts often cite weight as a potential risk factor for high cholesterol. The American Heart Association (AHA) says being overweight or obese can raise bad cholesterol and lower good cholesterol, and a weight loss of 5 to 10 percent can help improve those numbers. But there are other contributing factors.

“It’s not only about losing weight; it is also the composition of your diet,” says Nieca Goldberg, MD, medical director of the Women’s Heart Center at NYU Langone and radio show host of Beyond the Heart on Doctor Radio SiriusXM. “A good example is the keto diet. It’s effective for weight loss, but because it’s high in saturated fat content, it can raise LDL cholesterol.”

Dr. Goldberg recommends a Mediterranean-style diet that’s low in red meat and sweets; focuses on plant-based foods; and incorporates healthy fats high in omega-3s, such as olive oil and fish.

Cholesterol-Lowering Medications: A Necessary Next Step

Since weight loss and exercise hadn’t been enough to reel in Mastrojohn’s cholesterol numbers, taking medication was the next step.

According to Greenfield, statins are the most commonly prescribed medication to treat high cholesterol and can help people who have been unsuccessful at lowering their numbers through lifestyle modifications alone.

“Although some people are afraid of medication, the medications we have today are safe, and they are lifesaving,” says Greenfield.

Medication wasn’t an instant, easy fix for Mastrojohn, but after some trial and error, he found the right drug for his health needs. “I’ve actually had to change my medications a few times, given some side effects like muscle pain, but I recently found one that hasn’t given me any issues,” he says. “The medication has had a huge impact on my cholesterol. I’m now in a normal, acceptable range.”

Ten years after starting medication, Mastrojohn is effectively managing his numbers and keeping up his healthy habits.

Greenfield agrees with this approach. “Today’s medications are so good that they may normalize [a person’s] cholesterol numbers by themselves, but good lifestyle [habits], involving a healthy diet plan, sufficient exercise, adequate sleep, and stress reduction, should always be included.” In addition to lowering cholesterol, a healthy lifestyle has many other health benefits, he adds.

Not only has Mastrojohn kept up the exercise routine his doctor suggested, but he also recently added a new walking regimen that has made a big difference in his overall health and well-being.

“I’ve been working from home since March 2020, and I knew I couldn’t just sit inside all day without moving,” he says. “My daily commute into New York City from New Jersey provided lots of exercise — walking to the office, running to catch a subway train — but the pandemic changed all of that.”

Mastrojohn set a goal to walk 5 miles a day at least four days a week, and he’s been sticking to it. “I’m usually out there for 1.5 hours during each walk, through rain, sun, snow, sleet, and hail,” he says. “It’s hard to separate the impact walking has had on my numbers versus the medication, but it’s given me so much more energy, and it definitely isn’t hurting my numbers — probably only helping!”

According to Cleveland Clinic, aerobic exercise, such as walking, raises HDL cholesterol and lowers triglycerides; combined with weight loss and a healthy diet, it can also help lower LDL cholesterol. The AHA recommends at least 30 minutes of aerobic exercise most days of the week.

“Walking is a great exercise, because it’s aerobic, easy to do, and accessible. You don’t need a gym,” says Goldberg. Other options she suggests include running, swimming, and dancing.

Managing Cholesterol Is a Lifelong Process

Mastrojohn knows his cholesterol management will be a lifelong process, but it’s one he’s deeply invested in. He takes his medication regularly and has blood work done every six months to ensure his numbers remain in an acceptable range.

“I know many people are wary of having to take medications daily, as I was, but some things are out of our control, and you just have to do what you have to do,” he says. “I’m thankful that these medications exist to help prolong people’s lives.”

Mastrojohn hopes others can learn from his experience and educate themselves on how to stay healthy. “The issue with high cholesterol is that it’s not something you actually ‘feel,’ and unfortunately, some people find out they have it after it’s too late,” he says. “It doesn’t matter if you’re thin, overweight, in shape, not in shape — it can affect anyone.”

Mastrojohn knew early on to watch his cholesterol numbers because of family history, and he encourages others to do the same. “I can’t stress that enough, especially if you know that you have a family history of high cholesterol: Visit your doctor regularly, get it checked, and manage it accordingly,” he says. “And move, move, move. Don’t be sedentary! I’m not doing all of this just for me but for my family as well.”