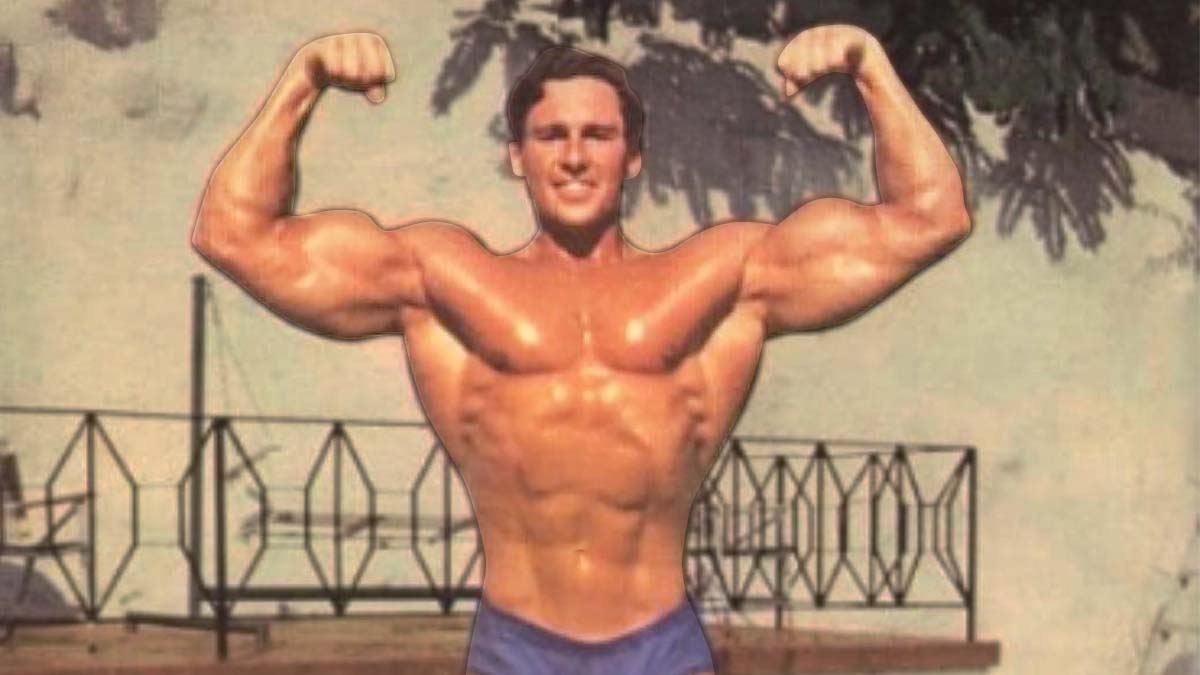 Mr. Apollo, Mr. USA, Mr. Universe, and Mr. America. These are the titles won by Steve Michalik. Known as the Phantom, Michalik was destined for greatness in the mid-1970s. He was supposed to be part of Pumping Iron, and many tipped him as a potential challenger to the great Arnold Schwarzenegger. A car crash put an end to those dreams.

Had Michalik appeared in Pumping Iron, this would likely be a celebratory biography, one in which his victories justified his excesses. Instead, Michalik is often discussed regarding the broader dangers of bodybuilding, most importantly — the win-at-all-costs mindset.

What separates a champion from their competitors? How far would you go to achieve your goals? Questions like these are often found in rousing motivational speeches and writings, but a darker side exists in the pursuit of glory.

Would you sacrifice family relationships? Friends? Your health? Your sanity? Would you be willing to undergo untold pains? Would you willfully embrace pain, not as a necessity, but rather as a friend? Here are just a few examples of the lengths Michalik went to to be as big and lean as possible:

Michalik embodied a win-at-all-costs mindset. His training program included up to 70 sets per body part, where others implemented 10 to 15. If a training partner took two pills, Steve took four, or six, or eight.

At a time when bodybuilding is once again coming under scrutiny about the dangerous practices competitors use to get stage-ready, Michalik’s life story is both a fascinating piece of history and a potential warning for current and future generations.

Born in Brooklyn, NY in 1949, Michalik had, by his testimony, a very troubled childhood. In a candid long-form interview with Paul Solotaroff and the Village Voice in 1991, Michalik recalled his father’s regular beatings and emotional abuse. Sibling rivalries with his brother Anthony often ended with his older brother telling Michalik that he would be put in a home somewhere. It was a difficult upbringing, one to which Michalik later linked to his stubbornness and determination. (2)

These qualities, which helped to push him so far in his bodybuilding career, were developed at an early age. At nine years old, Michalik came across a physician who impressed him with his body knowledge. A desire to know more, and to transform himself, drove Michalik to research and visualization.

In his early teens, Michalik’s interests were physiology and biochemistry, comic books, and bodybuilding culture. In 1965, after finishing high school, Michalik enlisted in the Vietnam War, where he served for several months. According to some of the legends in Michalik’s biography, he encountered several Taoist monks in Guam who helped him shape his mind for later achievements.

In a 2009 interview with Bryan Kahn, Michalik explained what he saw and what he learned:

“A British journalist offered to take me to see these Taoist monks that would come into town and perform amazing feats for food, coins, or blankets,” he said. “What I saw with my own eyes was incredible. They’d catch arrows shot at them with a 50-pound bow, stick needles in themselves and not bleed; I even saw one lift an elephant. They used their minds to conquer their physical surroundings. So I spent every spare moment I had learning from them how I could manipulate time, space, energy, and matter.” (3)

Regardless of his beliefs, this quote illustrates the intensity Michalik brought to his life. He carried this mentality over to his training. During his time with the military, Michalik set himself a simple goal — to become Mr. America. His reasoning was simple:

“I became interested in bodybuilding at age eight. My original inspiration was Captain America because he was strong and wise, and powerful. But since I couldn’t become Captain America, I decided to become Mr. America instead.” (4)

Although no longer the most prestigious title in bodybuilding (Mr. Olympia first started in 1965), the Mr. America held a special place in Michalik’s heart. It was the trophy many of his childhood heroes had won and, Michalik was determined to achieve the same glory — even if it killed him.

This isn’t hyperbole. Early on, Michalik displayed incredible recklessness with his training practices. There is a story that during his time with the Eighth Air Force, Michalik ignored sniper fire to finish his chest workout with a cinder-block barbell. (5)

When Michalik returned to the US, he returned to bodybuilding, and had to make up for lost time. In 1971, he won the Mr. USA title. Within twelve months, he also won the coveted Mr. America title (in 1972). Back then, the Mr. America contest was a highly political show. How contestants conducted themselves and their reputations offstage mattered a great deal.

Seeking to gain the favor of Peary Rader, the editor of Iron Man magazine, Michlaik wrote an article on the Death of Bodybuilding. He claimed that steroids were ruining the sport and, as a Mr. America hopeful, he had never taken steroids. (6)

The article was a lie. Michalik was clear that he took steroids that year — but his claims were a part of a game. Steroids came to bodybuilding in full force during the 1960s, and they transformed the sport. Many of the older generation, including Rader, complained that drugs ruined physiques, the sport, and people’s health.

Post-Mr. America, Michalik went quiet on the competing front but remained in the bodybuilding limelight. He was a regular guest poser at shows, was featured heavily in muscle magazines, and was made part of Charles Butler and George Gaine’s book Pumping Iron.

The book, which inspired the famous documentary of the same name, depicted Michalik troublingly. The Mr. America winner blamed bodybuilding for running (and ruining) his life. He spoke to them of the seedier elements of the sport, in which famous athletes doubled as sex workers, and the need for drugs meant associating with criminals. (7)

It was a stunning revelation from Michalik, and one that highlights his confusing relationship with the sport. Though he found success in bodybuilding, Michalik was troubled by what was needed to remain within the sport. For Gaines and Butler, Michalik’s honesty was exactly what they were looking for and, when they decided to produce a documentary, Michalik was tapped to be part of it.

In the interim, however, Michalik did not retreat entirely from bodybuilding. In 1975 he won the Mr. Universe and was on his way to becoming a Mr. Olympia contender before fate intervened. Shortly after the Mr. Universe contest, Michalik was in a severe car crash, which confined him to a wheelchair for several years.

The Comeback and the Comedown

In 1980, Michalik returned to bodybuilding at that year’s Mr. Miami competition. How did he do it? Determination, drugs, and an incredible pain tolerance.

For several months, Michalik trained with his brother Paulie in his local gym. Paulie would carry Michalik from station to station so that he could continue to train. Utilizing his Taoist mind techniques, Michalik endured a pain threshold regularly that few could even envision. (8)

This intensity, combined with a devil-may-care attitude to drugs, meant that Michalik achieved the miraculous. He not only walked; he also competed. Arnold Schwarzenegger himself introduced Steve as the “Phantom Bodybuilder,” a name that stuck for the rest of his career.

From 1980 to 1984, Michalik competed in the IFBB pro circuit — a series of smaller bodybuilding shows held throughout the United States. Although he never again won a competition, the sheer fact that he competed was remarkable. His physique had been badly damaged by the car accident in 1975, a point Michalik himself admitted, but his body was still superhuman.

In the 1985 documentary Pumping Iron II: The Women, Michalik helps train Bev Francis for her first major show. At the time, Michalik appeared as a focused and dedicated coach. That is, until the very end when it was announced that Michalik was that night’s guest poser.

His vigor shown on stage obscured a nasty truth. Michalik’s body was breaking down. Paul Solotaroff later wrote about Michalik:

“By 1983, he was bleeding from everywhere: his gums, kidneys, colon, and sinuses. The headaches started up, so piercing and obdurate that he developed separate addictions to Percodan and Demerol. And worst of all, his muscles suddenly went soft on him. No matter how he worked them or what he shot into them, they lost their gleaming, osmotic hardness, and began to pooch out like $20 whitewalls. His last two years on the tour were a run-on nightmare. He almost dropped dead at a show in Toronto, collapsing on stage in head-to-toe convulsions; the promoters, disgraced, hauled him off by the ankles.” (9)

Michalik eventually weaned himself entirely off of his chemical dependency. No more steroids, diuretics, or bodybuilding drugs. Through a series of intense detoxes, he managed to regain his health and, in the 1990s, became a vocal critic of the dangers of anabolic steroids. (10) He wrote articles, ran his gym — Mr. America’s Body Shop — and created workouts designed to make people healthier without drugs.

You can see Michalik retell his ill health around the eight-minute mark in the video below:

Michalik, in effect, began to embody his fictitious 1972 article — the Death of Bodybuilding. This time, he did honestly believe that steroids were abused within the sport to the detriment of all involved.

Sadly, Michalik’s story ended early. In 2012, at the age of 63, Michalik took his own life. As the strength community mourned, lifters remembered an individual who could be erratic, angry, kind, well-spoken but, above all else, driven.

“Intensity or insanity” was the label bodybuilder John Defendis given to Michalik’s training approach. (11) Defendis described it as “throwing a baby into a swimming pool to teach it how to swim.” The system begins with a conditioning phase, which teaches exercisers the intensity needed to progress to the building phase.

In the conditioning phase, trainees go through a six-station circuit targeting the major muscle groups (chest, back, shoulders, legs, etc.). For 35 minutes, trainees go through 35 sets using 700 reps. Trainees are required to choose a weight they would typically use for 10 reps and push it to 50 reps on some exercises. Rest is nonexistent as the tempo is kept high.

If people survived this program, which could take weeks or months, they progressed to the building phase where the same programming was still used (high reps, circuits, no rest), but training was split into body parts for different days. This is a general template. It changed depending on the day, the athlete in question, and the goals.

As Defendis made clear in his writing, absolute intensity and commitment were a must for Michalik. In all that he did or wanted from others. While Michalik demonstrated at times questionable behavior, he was also a complex man who proved to be loyal, intelligent, and motivated.

It would be too simplistic to cast Michalik as a warning sign for the sport’s modern tragedies. Plenty of other high-profile examples exist. Instead, it is likely wise to use Michalik’s story as an opportunity to discuss what limits, if any, should be placed on the sport’s ever-present desire for muscle at all costs.