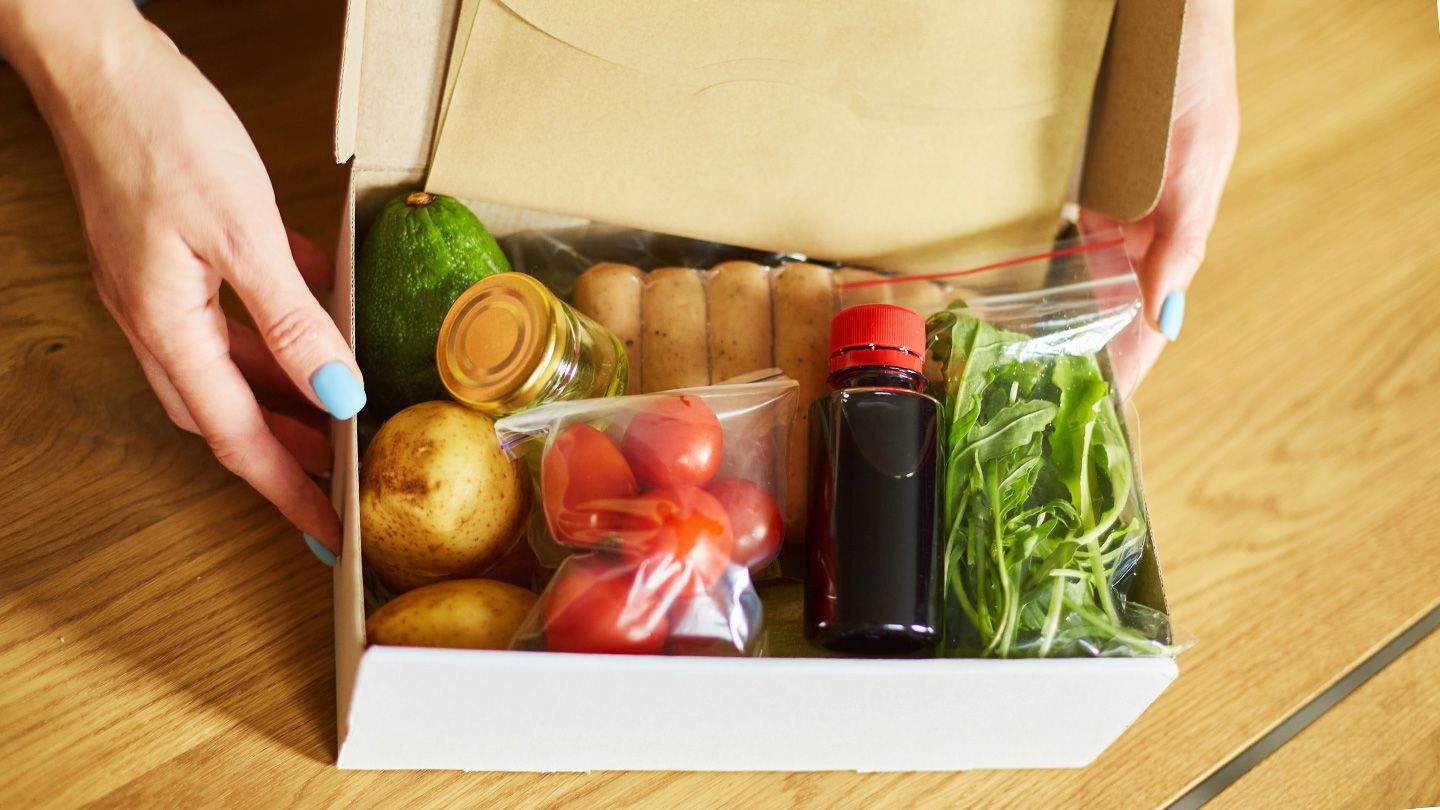 Diet, along with medication and other lifestyle changes, is an essential part of successfully managing high cholesterol levels. Making these changes can be a daunting process, one that involves unlearning some habits while picking up new ones, including how to cook heart-healthy meals.

In the high-stress, busy world we live in, the easiest answer to “What’s for dinner?” can often be quite an unhealthy one. Making positive diet changes can be intimidating, especially if your cooking skills are limited. One potential answer to successfully making these dietary changes are meal kits, which send customers pre-portioned ingredients, along with detailed cooking instructions, every week.

Meal kit options have proliferated in recent years, offering meals designed for a number of dietary restrictions, including vegetarian, vegan, low-carb, keto, and paleo. When it comes to heart-healthy options for meal kits, we decided to take a look at how some of the options stack up.

What a Diet for Managing High Cholesterol Looks Like

When it comes to maintaining a diet fit for your ticker, the American Heart Association’s (AHA) recommendations, published in December 2019 in Circulation, are to eat a well-balanced diet, one which prioritizes unprocessed foods. This includes eating more whole grains, low-fat or no-fat dairy, fruits, vegetables, legumes, nuts, seeds; using liquid, nontropical plant oils, like olive or sunflower; and limiting saturated fats, excess salt, and processed sugar.

The reasons for these recommendations are varied, so let’s look at why they are so important.

“[Saturated fat] has been associated with raising LDL cholesterol and contributing to developing atherosclerosis,” which is the hardening of artery walls due to a buildup of fatty plaques, says Kate Patton RD, a registered dietitian with Cleveland Clinic’s Center for Human Nutrition in Ohio. Low-density lipoproteins (LDL) are what cause a buildup of plaques in arteries, which causes them to harden, restricting blood flow, and can lead to heart attack or stroke. Higher LDL levels are linked to a higher risk of heart disease.

Saturated fats are primarily found in animal products like eggs, milk, cheese, and beef, which means that swapping out animal products for plant-based products could help lower your cholesterol levels. “Pay attention to the frequency of red meat and cheese you are eating,” Patton says. “Start by replacing red meat with chicken, lean turkey, or fish, or replacing with beans or lentils.”

When cutting out saturated fats, it’s really important to swap them with healthy options. “If you take saturated fat out and replace it with healthy fats, lean sources of protein, fruits, and vegetables, that’s where you are going to see a dramatic effect on your cholesterol levels,” says Kelly Kennedy, RDN, staff nutritionist at Everyday Health. “If you take saturated fats out and replace them with processed carbohydrates, you’re not going to see the dramatic effects that you were hoping for.”

Unprocessed foods, especially fruits, vegetables, whole grains, and legumes, have the added benefit of containing fiber, which helps you feel fuller. For foods such as beans, lentils, and oatmeal, they have a lot of soluble fiber, which will bind to cholesterol and excrete it from your body. “Oatmeal has been shown to be especially powerful against dietary cholesterol,” Kennedy says. “Beans are another important one. People don’t tend to eat enough of legumes, lentils, and beans.”

Cutting Down on Sodium

Although sodium is not directly linked to high cholesterol, eating a low-sodium diet is important for overall heart health, as too much can lead to high blood pressure. “High blood pressure is a condition that can creep up on you,” Patton says. The current recommendation is to eat no more than 2,300 milligrams (mg) a day, although the average American eats 3,400 mg per day, according to the U.S. Food and Drug Administration (FDA).

Processed foods are far and away the biggest culprit, having tons of added sodium even when they don’t taste salty. In fact, one study, published in May 2017 in Circulation, estimated that for American adults, over 70 percent of daily sodium intake comes from foods prepared outside the house — in other words, processed foods and meals eaten at restaurants. Examples of high-sodium foods include deli meats, frozen foods, canned soups, cheese, quick breads, prepackaged mixes, canned vegetables, commercially prepared pasta sauces, and bottled salad dressings. For better heart health, do yourself a favor and cut back on these offenders, per UCSF Health.

By contrast, that same study found that only 10 percent of sodium intake came from salt added while cooking or at the table, so you don’t need to fret too much about the amount of salt used in the kitchen.

If you do get specific instructions from your doctor to cut back on sodium, in addition to seriously cutting back on processed foods, Kennedy recommends switching to Diamond Crystal kosher salt, which has about half the sodium per teaspoon as other salts.

“We don’t tend to recommend brands, but that can make a huge difference for people watching their sodium intake,” she says. Another way to cut back is to cook more with spices and herbs, which can provide more flavor to offset lower amounts of added salt.

Another component of a heart-healthy diet is limiting the amount of processed sugars, since they can increase your triglycerides, a type of fat found in the blood that stores excess energy for later use, according to Mayo Clinic.

“Triglycerides numbers tend to be high when you have too much simple sugar [in your diet],” Patton says. Given that high triglyceride levels also contribute to hardening your arteries and thickening their walls, it’s especially important to reduce their overall levels. The good news is dietary changes that help reduce cholesterol levels, such as eating more unprocessed foods and healthier fats, also work to reduce triglyceride levels.

How a Meal Kit Can Help

Meal kits can cut down on the stress of shopping, by sending you all of the ingredients for a meal, in the exact amounts you need, along with instructions on how to cook it. This cuts down on the effort of planning and reduces food waste, while also encouraging you to try new recipes.

This is also a way to ease into healthier habits, whether it’s eating more unprocessed foods or cooking more often. “It’s not about being perfect; it’s about doing a little better and a little better,” says Kennedy.

Meal kits can also serve as a base, with room for altering them to suit your particular needs. “There is so much flexibility with a meal kit,” Kennedy says. “You can look for places to add in vegetables, serve it with a side of fruit, or add in beans to a salad or to a dish.” You can also swap in whole grains for white grains. “Don’t be too literal,” Kennedy says.

How Some of the Options Compare

Purple Carrot is a plant-based meal subscription service that offers meal kits as well as prepared foods. Since it’s entirely plant-based, the kits have no animal-based saturated fats, although it should be noted that saturated fats can be found in plant sources as well.

Salt is added separately, so you can choose the amount you put in, while keeping an eye on the sodium content of the packaged ingredients. You can also look for ways to add in additional lean sources of protein, such as fish, tofu, or beans.

Sunbasket is a meal subscription service that focuses on healthy meals, with offerings for a number of different dietary restrictions, including paleo, vegetarian, “lean and clean,” carb-conscious, Mediterranean, diabetes-friendly, chef’s choice, and “fresh and ready” options.

Sunbasket recommends focusing on the Mediterranean and diabetes-friendly offerings, as they prioritize heart-healthy fats like avocado, nuts, seeds, and olive oil, contain no more than 10 percent of calories from saturated fats, and keep sodium and added sugars at a capped amount.

Examples of meals include Oven-Roasted King Salmon With Asparagus Over Spicy Cannellini Puree, Middle Eastern Wraps With Roasted Mushrooms and Tahini Yogurt, Roasted Paprika Chicken With Parsnip and Pear Salad, and Black Bean and Quinoa Bowls With Zucchini and Avocado.

Blue Apron is perhaps the most-well known of the meal kit options. Although Blue Apron does not have a specific heart-healthy option, its wellness menu — which contains a variety of fruits, vegetables, whole grains, and lean proteins — is aligned with the needs of people watching their cholesterol.

Their WW-approved and 600-calories-or-less meals would probably be the best option, as these are designed to consider the overall proportion of calories, fat, saturated fats, and sodium. You should, however, keep an eye on the sodium levels, whether it’s limiting the amount of salt you add in or finding a way to swap some of their packaged ingredients.

Examples of wellness meals include Seared Pork Chops and Tzatziki With Mushrooms, Kale, and Shishito Peppers, Sheet-Pan Salmon With Green Goddess Potatoes and Arugula, and Romesco Shrimp and Couscous Skillet With Spinach and Tomatoes.

Mom’s Meals is a meal delivery service that provides prepared meals to people on certain Medicaid and Older American Act programs, as well as individuals and caregivers who are willing to self-pay. They offer meals for a number of dietary restrictions, including diabetes-friendly, low sodium, and heart healthy options.

For the heart-healthy options, they follow AHA guidelines, with a focus on lean proteins, fruits, and vegetables. This includes limiting fats to less than 30 percent of daily calories, and saturated fats to less than 10 percent. Sodium is limited to no more than 800 mg per meal.