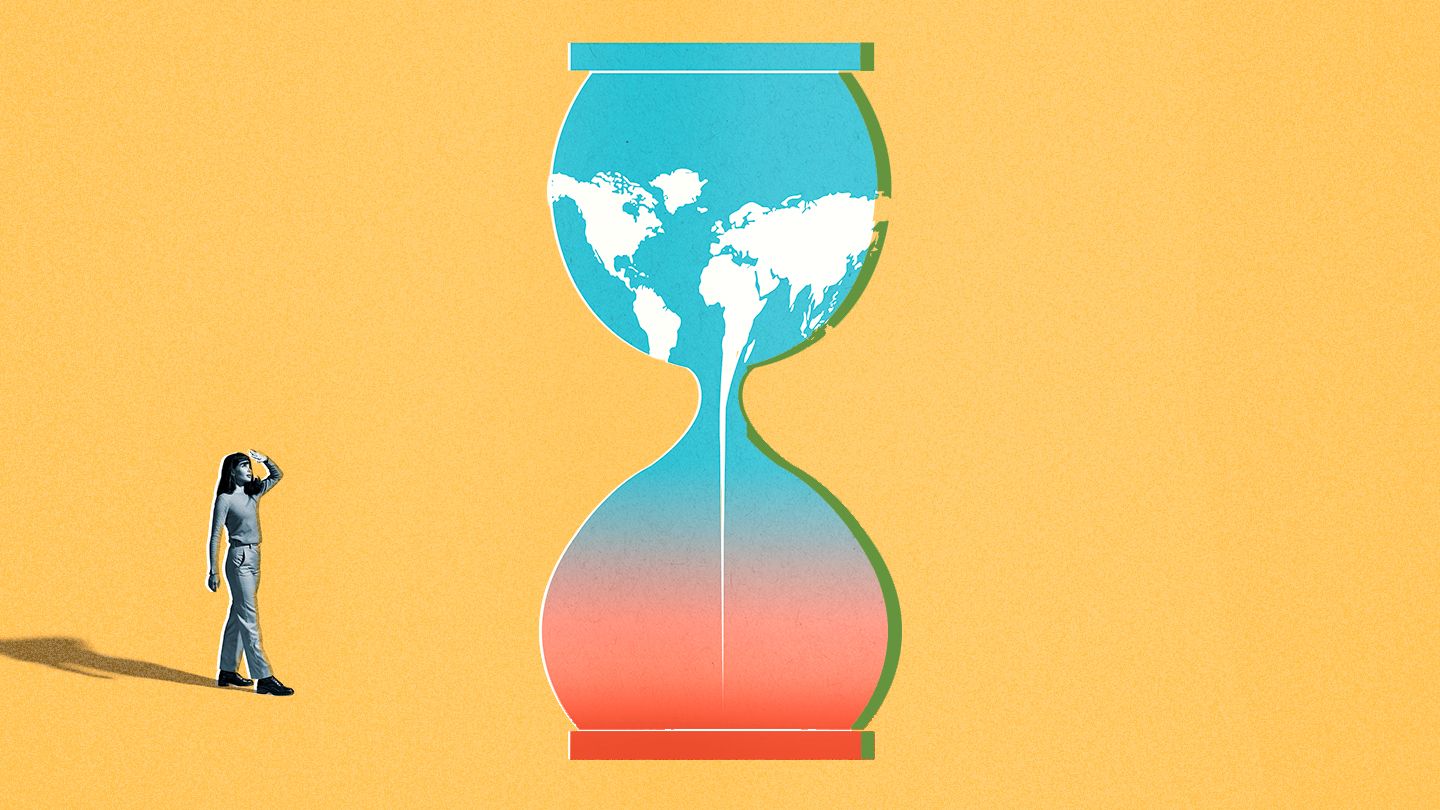 Ella Suring, 16, sees the impact of climate change outside her window and feels it in the air she breathes.

“Every fall, I associate the temperature and winds with fire season. If there is a wad of smoke, we have evacuation alerts. One day the sky was completely orange, and the sun never came up because of all the smoke,” says Suring.

Although her residence was never physically threatened by wildfires, Suring says she has a looming sense of dread about her future because of climate change.

When she first became concerned about it, Suring — like a lot of young adults — jumped headfirst into climate activism.

But Suring, who works with the Sierra Club, a national environmental organization, now admits, “I got overly obsessive.”

“I became very anxious around the uncertainty of my future and the uncertainty of everyone else around me,” says Suring. She became hyperaware of what foods and drinks she was putting into her body, because she didn’t want anything she ate to have bad consequences for the planet. As a result, she says, she developed an eating disorder.

It wasn’t until she developed heart problems and felt faint most of the time as a result of her eating disorder that Suring sought help and learned how to balance activism with self-care.

Suring is still engaged in climate activism, but now she also practices ashtanga yoga for two hours each day to keep her mental health in balance.

Climate anxiety like Suring’s is not uncommon. “Substantial evidence” supports a link between mental health and climate change, wrote Susan Clayton, PhD, the Whitmore-Williams Professor of Psychology and the chair of environmental studies at the College of Wooster in Ohio, in a research article published in the Journal of Anxiety Disorders in June 2020.

This connection appears to be especially potent among young people, according to a September 2021 global survey of nearly 20,000 people from 17 countries, published by the Pew Research Center. The findings showed that young adults are much more worried about the effects of climate change — including wildfires, floods, droughts, and stronger-than-normal storms — than adults over 65.

For example, in Sweden, researchers found that 65 percent of 18- to 29-year-olds have concerns about how climate change will impact them personally in their lifetimes, compared with just 25 percent of people age 65 or older. This was the widest age gap observed in the study.

In another global study published in September 2021 in the Lancet, for which researchers surveyed 10,000 young adults ages 16 to 25, 45 percent said climate change negatively affects their daily lives and functioning.

Dr. Clayton adds, “[Young people] are feeling angry and betrayed at the idea that those in charge are leaving them holding the bag … They are going to have to deal with the consequences to a greater extent than the older generations since they will live longer.”

The pandemic probably makes it worse, say experts. The “cumulative trauma” from the pandemic and other recent world events may have primed the pump, says Lise Van Susteren, MD, a general and forensic psychiatrist in Washington, DC, who cofounded the Climate Psychiatry Alliance and Climate Psychology Alliance of North America.

While concern about climate change is warranted, it’s causing enough worry and anxiety in some young adults that mental health professionals are warning of a looming climate-change-related mental health crisis among many of them.

“[Young people are] absolutely feeling this stuff,” says Van Susteren. “Is it all of them? No. However, there’s enough of them and they’re vocal now … This is real, and it’s getting worse.”

And although research has not yet shown a connection between climate anxiety and suicide, Clayton says suicide could quite possibly be a worst-case scenario.

Clayton adds that one doesn’t need to have a personal experience with a climate-related natural disaster or another environmental challenge to experience climate anxiety. It can affect anyone in different ways.

“In general, people with fewer sources of social support and more direct experience or related experiences are likely to be more strongly affected, but there are other sources of variability in individual response that are difficult, or impossible, to predict,” says Clayton.

How One Young Adult Coped When Climate Activism Led to Burnout

When Lisandra Morales, 18, became involved in climate activism as a senior fellow and youth advisory board member of Action for the Climate Emergency (ACE) in Florida, they had a hard time focusing on anything other than climate change. “For a while I couldn’t take my grip off the entire situation in general,” says Morales, who attends the University of North Florida in Jacksonville.

Once they started learning about it, they said, it absorbed all of their attention for years. “I couldn’t take my eyes off it. It kept me from going out and being social,” says Morales.

They stopped playing volleyball and soccer and also stopped talking to friends who didn’t share their political views.

“Through everything I was doing, I always had the climate crisis and activism in the back of my head,” Morales says. “I honestly do feel like my teenage years were taken away from me because I never felt fully able to relax and have fun knowing that the world was basically ending and there was not much I could do about it.”

Luckily, Morales’s mother stepped in and helped them diversify their interests again.

Morales says after they became burnt out by climate activism, they got back into playing volleyball and other old hobbies they used to enjoy, like watching TV shows, reading, and spending time outdoors.

As far as friends go, Morales says, “I ended up connecting with more like-minded people in my non-climate spaces than trying to rekindle old friendships that I lost, and I honestly think it worked out for the best.”

Morales’s advice to other young adults thinking about getting involved in climate activism? “Learn about yourself and what you can handle and different ways to recenter yourself before you get into the process, because once you are in the process it is really hard to find yourself if you’re already deep down the rabbit hole.”

Experts stress caution when talking with others — especially children, adolescents, and young adults — about climate change.

“I think as families we need to model being aware of climate change and what it means without the sort of apocalyptic catastrophizing that we’re all going to die,” says Mary Karapetian Alvord, PhD, a psychologist and the director of Alvord, Baker & Associates in Rockville and Chevy Chase, Maryland.

Dr. Alvord suggests families talk about climate at the dinner table with a special emphasis on the things everyone can do to help the planet, such a composting and recycling. This could help stem the helplessness and uncertainty young people feel about the environment, she explains.

Van Susteren recommends that parents of teens or even kids be aware of any signs that their child is struggling with anxiety about climate change.

“We don’t always talk about what’s bothering us the most. Parents have to be on the lookout for themes,” Van Susteren says. For example, kids may express a lack of motivation to do homework or other daily tasks because they feel the future of the environment is a mess and no one seems to care about what’s worrying them.

Van Susteren stresses that if teens have dark thoughts or feelings of hopelessness or helplessness, parents should validate those feelings without arguing with them.

“Tell your child, ‘We can talk about this.’ You might want to do it right away when you first hear it, or you might want to go for a walk or ride in the car to reduce the intensity and make the person feel more comfortable discussing it. However, there’s no one-size-fits-all,” Van Susteren says.

Alvord adds, “If someone is ashamed or feeling guilty about worrying about it so much, it’s important to talk with someone who shares similar concerns, but who perhaps can help put perspective on it so it doesn’t feel all-consuming.”

Van Susteren suggests asking your loved one directly if they need help, which can empower them to share how they’re feeling. And for young people with climate anxiety, Alvord recommends talking about it with someone you trust — a partner, friend, relative, or teachers.

Alvord also notes that some level of anxiety is normal, even good. “Some anxiety actually motivates us and drives us into action. If we didn’t have any anxiety, it wouldn’t be good,” she says.

The key is to notice when your anxiety, or someone else’s, starts getting in the way of your everyday life. Chronic stressors, like persistent worry about climate change, can lead to other mental health issues, including major depressive disorder, an anxiety disorder, or obsessive-compulsive behaviors in an attempt to manage the anxiety. At this point, what has unfortunately become a common concern over climate change can morph into a serious mental health issue.

“If your obsession leaves you on the sidelines of life, or not actively engaging in what’s age appropriate, it’s time to reassess the situation,” says Alvord.

If you or a loved one is experiencing suicidal thoughts or behaviors, call the 24/7, toll-free National Suicide Prevention Lifeline at 800-273-8255. A trained crisis counselor will listen to your story, support you, and connect you with resources you need.