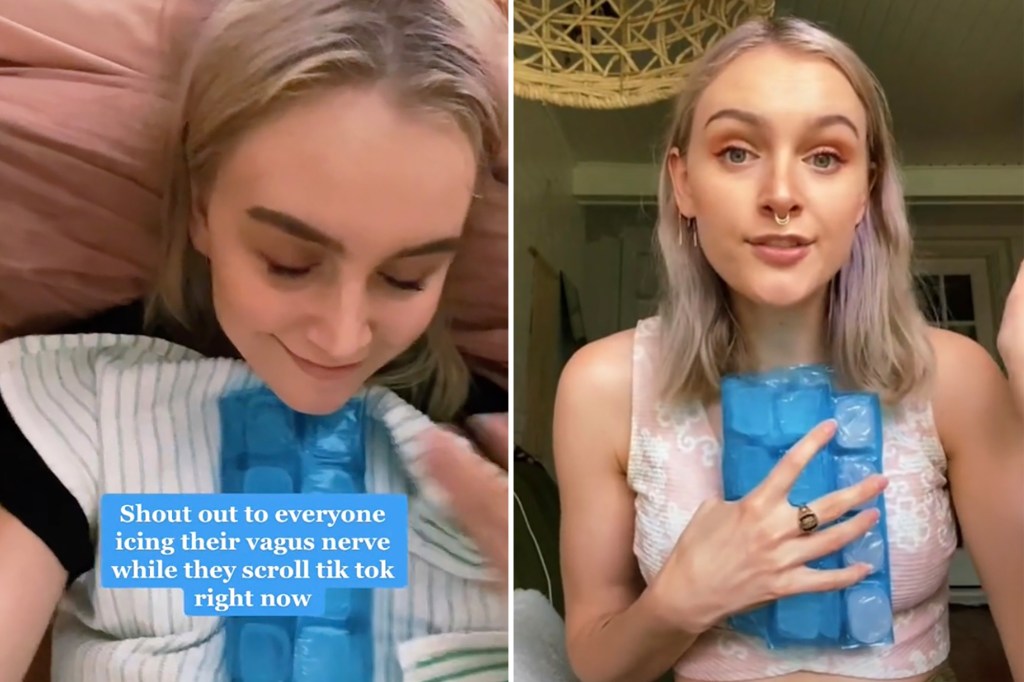 We’ve all tried reading a book, deep breathing and counting sheep to get to sleep.

But one woman has claimed holding frozen peas to her check has “changed her life”.

In a viral TikTok video, Frankie Simmons explains how the hack has rid her of a habit of waking up at 4 am every night.

She said: “A couple of years ago it was a very regular occurrence for me to wake up at 4 am with anxiety all the time.”

“And I’d have to pull myself up out of bed and do all this breathwork and energy work and tea drinking and spend forever trying to calm myself down to go back to sleep.

“All that changed the day that I found out about icing your vagus nerve.”

The vagus nerve starts in the brain and passes down through the neck, chest and abdomen. There is one on each side of the body.

You’ve probably never heard of the vagus nerve, despite it being crucial to bodily functions.

It’s part of the autonomic nervous system, which means it’s involved in decreasing heart rate, alertness and blood pressure – helping with calmness and relaxation – among other things.

For example, the vagus nerve stimulates certain muscles in the heart that help to slow heart rate.

The sympathetic nervous system does the opposite job, increasing alertness, heart rate and more.

Frankie said applying cold to the vagus nerve “stimulates [the vagus nerve] and helps it do its job better”, as well as “reducing inflammation”.

“But, if you want to save yourself the discomfort, just put an ice pack on the center of your chest. Wrap it in a towel, put it right there, lie down for at least 15 minutes and it is a game-changer.”

“When I found [out about] this… I didn’t even have an ice pack at the time, I would just go to the freezer, get a pack of peas, put it between my boobs and I’d be back out in no time.

“It changed my life. I want everybody to know about this magic.”

Another fan of the technique is Dr. David Clancy, a lecturer in the Department of Biomedical And Life Sciences at Lancaster University, who says he sometimes uses icing to help get to sleep.

He told The Sun: “The idea is that it stimulates the parasympathetic part of the autonomic nervous system to go from stressed (flight/flight) to calm.”

“The evidence is not strong yet, but there are some suggestions that it can help.”

The vagus nerve is thought to be involved with many conditions, including depression, heart disease, epilepsy and headaches.

A device that can be implanted under the skin that stimulates the nerve is approved for depression and epilepsy in the US.

But some have found natural ways to give it a go, claiming it has been life-saving.

This includes exposure to extremely cold conditions, such as taking a very cold shower or – as Frankie does – applying ice to the neck or chest.

Deep breathing and meditation is also hailed as a way to “influence vagal tone” (activity).

While these sorts of methods need more research, some experts believe they make a difference.

Swiss psychiatrists wrote that increasing vagal tone “through meditation and yoga likely contributes to resilience and the mitigation of mood and anxiety symptoms”.

They said in their paper that high vagal tone is “correlated with the capacity to regulate stress responses”.

“Vagus nerve stimulation and several meditation techniques demonstrate that modulating the vagus nerve has a therapeutic effect, mainly due to its relaxing and anti-inflammatory properties.”

Healthline also reports that “people with a strong vagal tone may find it easier to relax after a stressful event, and their body may be better able to manage inflammation and gut issues”.

It suggests that conditions tied to inflammation may benefit from vagus nerve stimulation, including IBS.

This story originally appeared on The Sun and was reproduced here with permission.