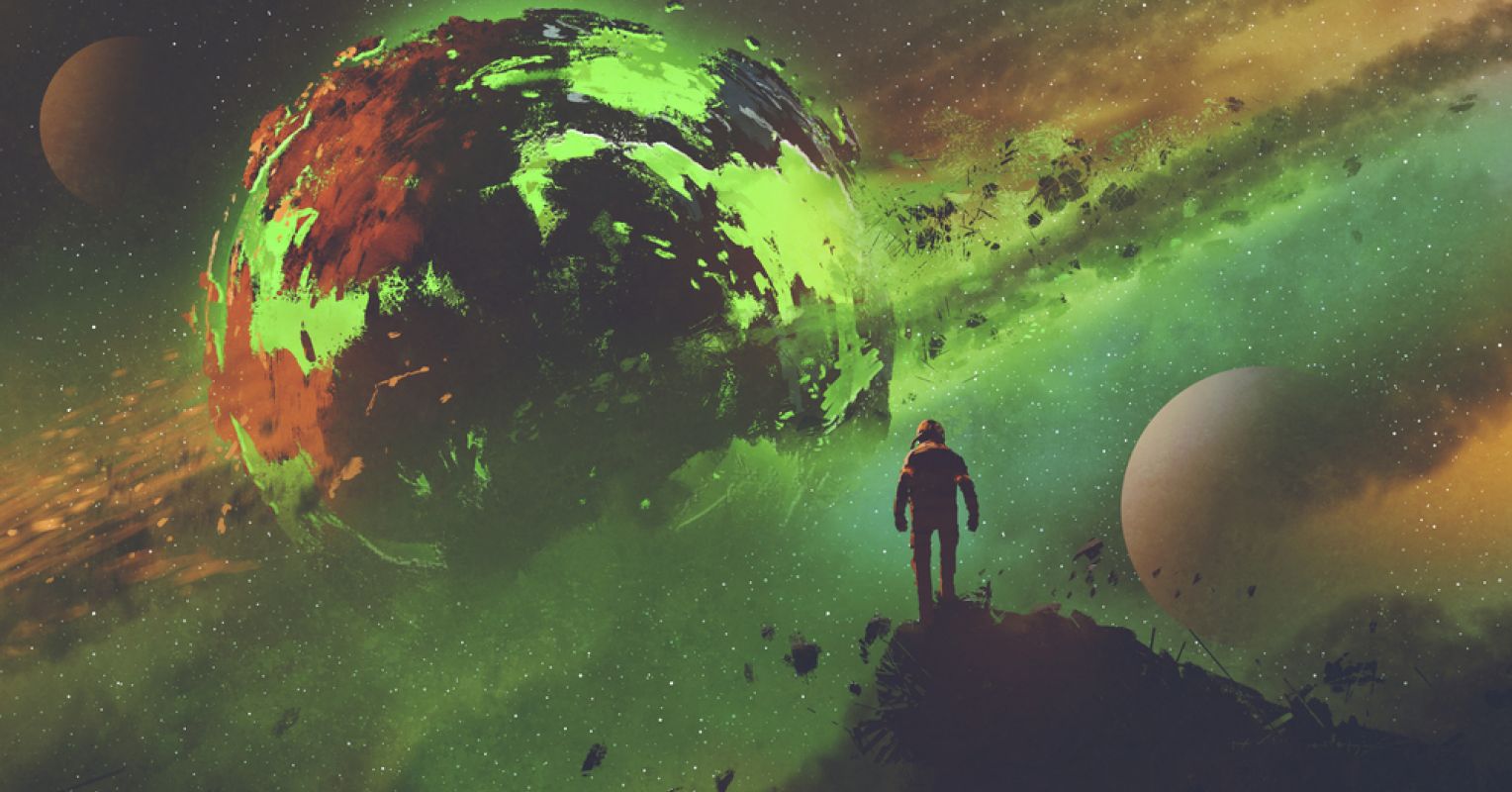 To learn to be anxious in the right way is to learn the ultimate. –Søren Kierkegaard

When people think about science fiction, things like space travel, alien invasions, and futuristic technologies typically come to mind. Sci-fi is all these things, but it’s also much more. It can take place any time from the present to billions of years forward in evolutionary history, from the recent past to a time before memory that feels like the future. Sci-fi inhabits places that feel familiar or where people are strangers in a strange land. All the while, sci-fi navigates and maps all the uncertain possibilities of being human—and helps articulate our purpose in the universe. That’s why it speaks the language of anxiety, but also of hope.

Renaissances in Science Fiction in Times of Upheaval

Indeed, it’s no coincidence that renaissances in sci-fi occur during dynamic and fraught periods of technological and societal upheaval. During the first Industrial Revolution, Mary Shelley imagined a patchwork man brought to life during a lightning storm by a miracle of medical science, and Jules Verne took humanity 20,000 leagues under the sea and to the center of the earth, not to mention around the world in 80 days and from the Earth to the moon. As the post-WWII world recovered from the unimaginable, it also reaped the benefits of the second Industrial Revolution, with ubiquitous use of electricity and the internal combustion engine. Arthur C. Clarke envisioned the iPad; Ray Bradbury landed on Mars, one-upping the landing on the moon; and Captain Kirk took Earth on a “Star Trek” where no one had gone before.

And now, in the 21st century, technologies that used to take up entire rooms can be easily held in the palm of the hand, information can be shared at the speed of light through fiberoptic cables, and artificial intelligence lurks, commonplace, in every corner. Almost on cue, sci-fi has become our mainstream form of entertainment: nostalgia trips like “Star Wars,” “Dune,” and “Ready Player One”; or, for the younger set, dystopias ripped from the pages of YA novels like Divergent and Maze Runner, The Hunger Games and The Mortal Instruments. And, of course, you cannot escape multiple universes chock full of comic book heroes like Wonder Woman, Shang-Chi, Black Panther, Spider-Man, and dozens of others. There’s a superhero for everyone. And it’s a good thing. Sci-fi is the creative outlet for now, when the range of possible futures seems dizzyingly impossible to predict.

In essence, sci-fi is the genre of change, of human potential, of how, through technology, people change the world and themselves, for better and for worse. It’s because sci-fi is the fulfillment of anxieties and hopes that, if you do a running tally, it’s actually not that good at predicting the future. No evil AI taking over the world, flying cars, androids running amok, or jacking into an intoxicating cyber-matrix through our cranial ports…yet.

What the great works of sci-fi are really good at is helping people grapple with the concerns, conflicts, and anxieties of the day through the comfortable distance of a parable. In her 1973 short story “The Ones Who Walk Away From Omelas,” novelist Ursula K. Le Guin presents a psychomyth about a fictional utopia, Omelas. Its beauty and splendor were unsurpassed—so pleasing, in fact, that to convince the reader that it really exists, the narrator shares its one atrocity: a single child kept in perpetual misery, tortured in a room underneath the city, in the filth and the dark, with no kindness offered. If ever this child’s misery is relieved, even in the smallest way, the utopia would be destroyed. This is the payment for everyone else’s happiness.

This terrible truth is revealed to citizens when they come of age. Most, initially horrified, soon acquiesce to the arrangement because it secures the happiness of all. But a few of them refuse the bargain and eventually leave the city. The story ends, “The place they go towards is a place even less imaginable to most of us than the city of happiness. I cannot describe it at all. It is possible it does not exist. But they seem to know where they are going, the ones who walk away from Omelas.”

Sci-fi perennially confronts difficult truths and injustices to chart a better path to the future. Afrofuturism is a subgenre of sci-fi that envisions technologically and artistically rich futures for Black and African diaspora communities. From writers like Octavia E. Butler and Samuel R. Delany, to musicians like Sun Ra and George Clinton and P-Funk, to images on the screen, like the women warriors of Wakanda from Marvel Studios’ 2018 blockbuster film “Black Panther,” Afrofuturism reclaims the inheritance of the ancestral histories, identities, symbols, and philosophies that were systematically destroyed through the institution of slavery. It pushes back against the stark fact that the vast majority of sci-fi is almost completely devoid of characters who are Black. Primarily created and inhabited by white people, sci-fi has historically left little place for others. The future seems to be white, so, in the most basic sense, Afrofuturism envisions a future for Black people in which they simply exist—and can thrive.

Kindred, by Octavia E. Butler, is a cornerstone of Afrofuturism. In it, Dana, a young Black woman, and her white husband, Kevin, are inexplicably transported from 1970s California to the antebellum South. Time traveling back and forth between these worlds, Dana encounters her own ancestors, including Rufus, a white slaveholder. To ensure her own existence, she must keep him alive until her great-grandmother is conceived. Along the way, Dana struggles to find a glimmer of moral redemption for Rufus, but there is little to be had. In the end, she is forced to kill Rufus in self-defense. As she arrives back in the seemingly safe present, she finds that her arm is severed and crushed where Rufus grabbed her, underscoring that she cannot chart her future without reckoning with the past.

The promise of sci-fi is that it helps us make sense of our anxieties and, in the process, provides inspiration and consolation—and a vision for the future. It reminds us of the things about which we care. It lights a fire under us. You don’t have to love sci-fi to be reminded of the key questions it raises: How do you find purpose? How do you steer your life toward the things you care about and the future you want? Once you ask those questions, you will start to find some answers. And when you do, like those who walk away from Omelas, you might not be sure where you’re going or exactly what you’ll do when you get there, but being anxious in the right way means that you’ve decided that it’s worth taking the journey.