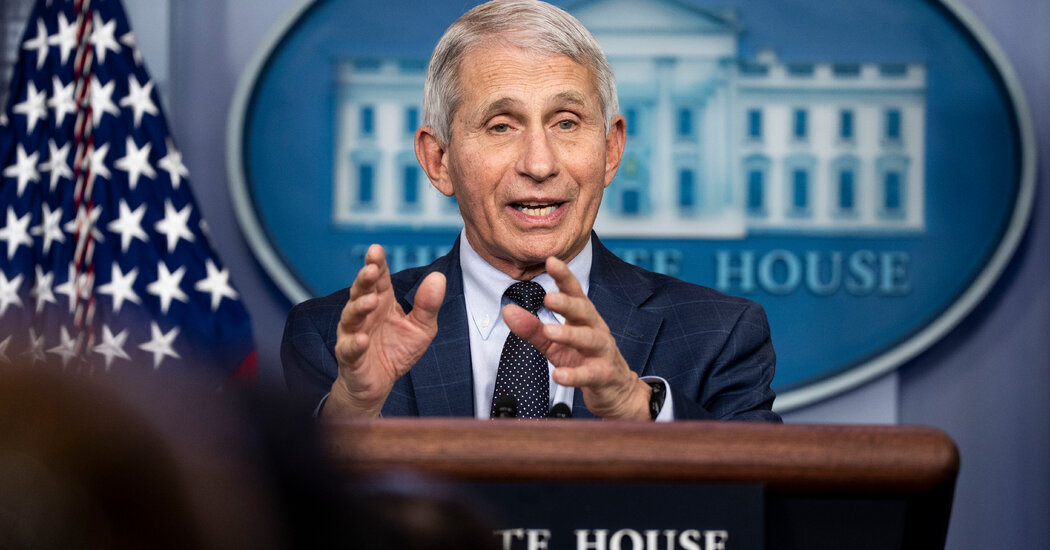 WASHINGTON — Vice President Kamala Harris’s coronavirus infection is raising questions that some in the nation’s capital wish would remain unspoken: Is it safe for President Biden to attend the so-called nerd prom, otherwise known as the White House Correspondents’ Dinner? Should the dinner even be held?

The flashy event, where journalists, politicians and policy wonks mingle with celebrities, is returning in person on Saturday after a two-year absence because of the pandemic. It will be the first time a president has attended since 2016. Expected attendance: 2,600.

As the nation lurches out of the acute phase of the pandemic and into what some are calling the new normal, the dinner — like so much of American life — is prompting a good deal of risk-benefit calculation. Dr. Anthony S. Fauci, Mr. Biden’s top medical adviser for the coronavirus, said on Tuesday that he had decided not to attend “because of my individual assessment of my personal risk.”

But Mr. Biden, who at 79 is two years younger than Dr. Fauci, will be there, as will his wife, Jill Biden. The White House press secretary, Jen Psaki, told reporters on Tuesday that Ms. Harris’s diagnosis had not changed the president’s thinking about the dinner, which she described as an opportunity to “talk about the importance of journalism in the world.”

“Just like many Americans, he makes risk assessments,” Ms. Psaki said, adding, “That’s an event he’s attended many times in the past, and he made a decision through consultations that it was an event he could attend and wanted to attend again.”

On Wednesday, after this article was published online, the White House made a slight shift in course; Ms. Psaki told reporters that the president might wear a mask at the dinner when he was not speaking, and would not attend the eating portion so he could attend “in a safe way.”

In interviews, public health experts were largely, though not entirely, supportive of Mr. Biden’s choice. The organizers of the dinner are taking precautions, including requiring all attendees to be vaccinated and to provide proof of a negative Covid test taken that day. With vaccines and antiviral drugs available, some experts said, the time for shunning large gatherings is in the past, at least for most healthy people.

The dinner, in a cavernous ballroom at the Washington Hilton, is not the only large-scale event the president was scheduled to attend this week. On Wednesday, he delivered a eulogy at the funeral of Madeleine K. Albright, the former secretary of state — an event that drew an estimated 1,400 mourners, most of them masked. On Sunday, Mr. Biden will travel to Minnesota to speak at a memorial service for former Vice President Walter Mondale.

Many public health experts are making calculations of their own. Dr. Carlos del Rio, an infectious disease specialist at Emory University, said he had just returned from Lisbon, where he was among 8,000 attendees of the European Congress of Clinical Microbiology & Infectious Diseases. It was a risk that, with precautions, he was willing to take.

“Everybody was vaccinated, everybody was masked except when speaking,” he said. “But we also went to restaurants and did other things, and I didn’t get infected, so I feel very good about that.”

Jennifer Nuzzo, an epidemiologist who is leading a new program on pandemic preparedness at Brown University’s School of Public Health, said she recently attended a large indoor conference and was one of the few wearing masks. She has not gotten Covid-19 and does not want to, but, she said, “I am also not completely rearranging my life trying to dodge it.”

Everyone has a different risk tolerance, and experts say it is important not to judge other people’s choices. But the president, being the president, has an obligation to the public to not get sick, said Dr. Arthur L. Caplan, the director of N.Y.U. Langone’s division of medical ethics. He said Mr. Biden should not attend the dinner, ticking off the reasons in an email.

“He is high-risk and occupies a very high office at a time of war,” Dr. Caplan wrote, adding: “He must be hypersafe. The correspondents’ dinner is highly optional. With the V.P. sick, he really needs to protect himself. His office imposes a duty of precaution.”

Ms. Psaki conceded that Mr. Biden could contract Covid, adding that if he did, the White House would be “very transparent” about it. She said the White House took numerous precautions — beyond those of most workplaces — to protect Mr. Biden, including social distancing, regular testing and wearing masks during meetings.

Yet she also noted that the president was traveling more lately, having concluded that getting out into the country was “vitally important to him, to his presidency, to the American people.”

Still, there is an uneasy feeling here — and a worry that maybe a gathering of 2,600 people, including journalists and politicians who have spent more than two years warning about the dangers of the pandemic, may not be the best look.

“Well, there is a question of whether it’s EVER appropriate to engage in an exercise in gaudy, celebrity-drenched self-adulation,” David Axelrod, a Democratic strategist who was a senior adviser to President Barack Obama, wrote in an email, “but that’s a separate question.”

However, Mr. Axelrod added, “The country plainly is eager to move on, and people are regularly gathering in public places — stadiums, theaters, restaurants — and, as a political matter, I’m sure the president is eager to embrace the sense that the siege is largely behind us.”

Yet there is no shortage of reminders that the siege may not, in fact, be largely behind us.

The Gridiron Dinner, another gathering of A-listers in the capital, turned into a superspreader event this month. More than 70 attendees later tested positive for the coronavirus, including three members of Mr. Biden’s cabinet — Attorney General Merrick B. Garland, Agriculture Secretary Tom Vilsack and Commerce Secretary Gina Raimondo — as well as Mayor Eric Adams of New York.

“The Gridiron freaked everybody out,” Sally Quinn, the Washington journalist, socialite and widow of Ben Bradlee, the former executive editor of The Washington Post, told Axios. “I know a number of people who are not going because they are not wanting to chance it,” she added, referring to the correspondents’ dinner.

The annual gala, hosted by the White House Correspondents’ Association, has been a fixture of Washington political life for decades.

Accompanied by a long weekend of spinoff parties, the event raises money for scholarships and honors journalists for distinguished White House coverage. It typically features celebrity entertainment — this year’s featured guest is Trevor Noah — and a roast of the president. But the gala has drawn criticism for coming across as an unseemly bacchanal in which journalists cozy up to the people they cover. The New York Times has not allowed its reporters to attend since 2007.

The correspondents’ association is clearly aware of the sensitivities. “You’ve had lots of questions,” its president, Steven Portnoy of CBS News, wrote to members in an email this month. “So here’s an update from me on our Covid-19 mitigation strategy.”

Citing advice from Dr. Fauci, who suggested same-day testing in addition to a vaccination requirement when asked if large-scale events should proceed, Mr. Portnoy said guests would be required to provide proof of vaccination and a same-day negative antigen test via Bindle, a verification app.

He also added some advice of his own, telling members that if they were eligible for a fourth dose of vaccine, they should consider getting one.

As for Mr. Biden, Dr. Leana Wen, a former Baltimore city health commissioner who has been a vocal proponent of returning to pre-Covid routines, said the president must ask what is important to him. The mitigation measures at the dinner mean Mr. Biden is likely to avoid severe disease if he gets infected, she said. If he wants to avoid infection entirely, she added, he should not go.

“However, that is not what living with Covid looks like, and I think that it is very important for him to model that ultimately what Americans should care about is avoiding severe disease,” Dr. Wen said, adding, “Especially if there are precautions such as testing and vaccination, he needs to show that we can resume our prepandemic lives.”

Dr. Wen said she would not be attending the dinner for a different reason: “I was not invited.”