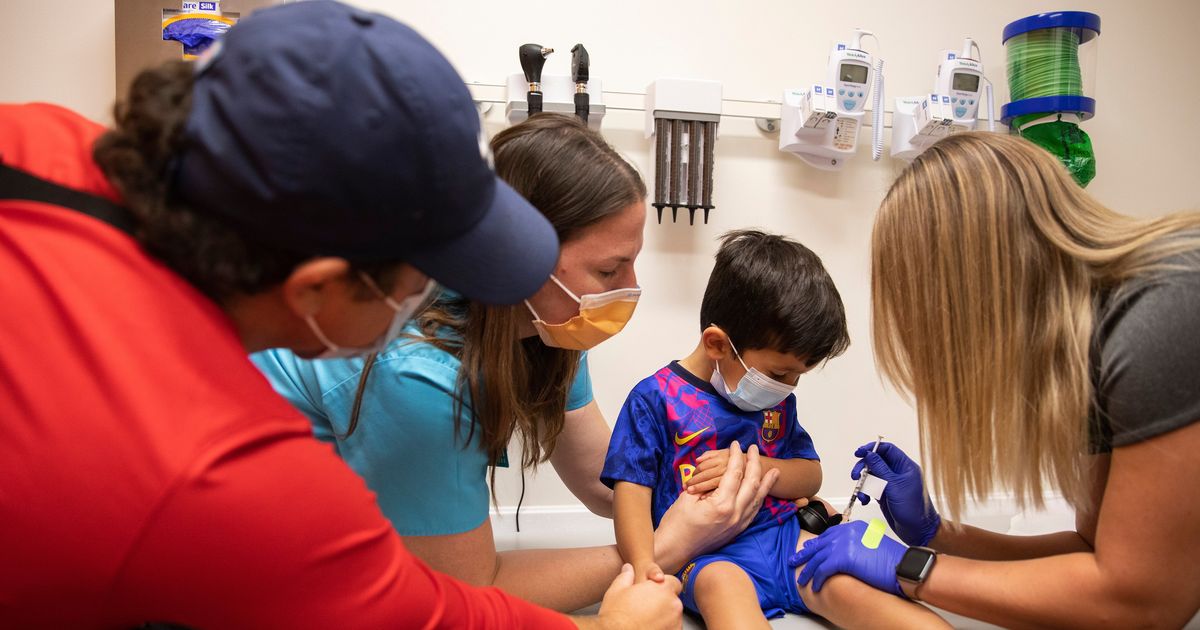 COVID-19 vaccines for children under 5 years old were recently approved.

Though the process to get shots in arms is slow across the country and in Washington, parents may soon begin making appointments for their little ones. But many may still have questions.

Here’s what you need to know about the recently approved vaccines:

Who is eligible? The Pfizer-BioNTech and Moderna vaccines have been approved by the U.S. Food and Drug Administration, the Centers for Disease Control and Prevention and the Western States Scientific Safety Review Workgroup for children as young as 6 months old.

The children join the rest of Americans in all other age groups in being eligible for a vaccine.

When can my child receive the vaccine? The new vaccines were approved and recommended just this past weekend. It may take some time for states to receive their doses.

Last week, the Department of Health said it had ordered 151,600 doses for those under 5 from the federal government. Of those, approximately 88,000 had already been ordered by providers and about 63,600 were still available for licensed providers to order.

The department did warn providers may not receive doses until June 21 or later, however.

Dr. Francisco Velázquez, the Spokane Regional Health District’s health officer, told reporters Wednesday that the regional health district had yet to receive any doses. Once available, families can make appointments through their providers.

Because the dosage is different for smaller children, providers can’t just use the doses they may already have for adults.

“Just because it was approved doesn’t mean we have it in our hands,” said Dr. Sarah d’Hulst, pediatrician at MultiCare Rockwood.

Health care staffing shortages and supply chain issues could also result in it taking a bit longer for shots to get into arms.

For her part, d’Hulst said she feels confidently that children will start getting vaccinated against COVID-19 in the next week or so.

How does it differ from adults? For the most part, the COVID-19 vaccine for children is similar to that already approved for adults.

The main difference is the dosage levels, d’Hulst said. Kids may also see different side effects than adults.

What are the risks or side effects? For the most part, the side effects for babies and toddlers are similar to that of adults.

According to the Centers for Disease Control and Prevention, younger children may experience fewer side effects after the COVID-19 vaccine than teens or young adults.

Children 4 years and older are more likely to see common side effects, such as fever, tiredness, pain where the shot was given, headache, chills, swollen lymph nodes or muscle pain. Children 3 years and younger may experience side effects such as pain where the shot was given, swollen lymph nodes, irritability or crying, sleepiness or loss of appetite.

In studies, kids who got Moderna were slightly more likely to have a post-injection fever than those who got Pfizer, d’Hulst said.

A small number of kids in the older age group already approved for vaccines had a very rare, very mild myocarditis. Researchers were very careful to look for that in the younger age group, d’Hulst said.

“They did not find that,” she said. “Parents don’t need to be concerned about that.”

“Having lots of antibodies helps our body to recognize if it’s been exposed to it again and quickly mount a response to that infection,” she said.

There is still a lot of transmission in the community, Velázquez told reporters Wednesday. Even if a child or an adult has been infected with COVID-19, vaccines still work really well to prevent another infection.

Although children who get COVID-19 often get a milder illness, d’Hulst said vaccines are still the best protection to prevent serious and life-threatening illness from COVID-19.

As of Wednesday, Velázquez said about 70 people were in county hospitals, including four pediatric patients.

Some children can also get “long COVID,” which is when symptoms, such as fatigue or brain fog, continue long after infection.

“What we don’t know is long term how that will affect kids,” d’Hulst said.

Why did it take so long to be approved? When any new vaccine comes out, it is quite common that studies start with adults, d’Hulst said. It’s often much easier for adults to consent to a research study than for kids.

“It’s just a normal progression that we do for many vaccines,” she said.

For the COVID-19 vaccine in particular, researchers learned very quickly that older people were at a much higher risk of death or serious disease than children, so it became important to quickly get those people a vaccine, d’Hulst said.

The Panhandle Health District reported 319 new cases in the last week. There are 11 people hospitalized with the virus in the district.