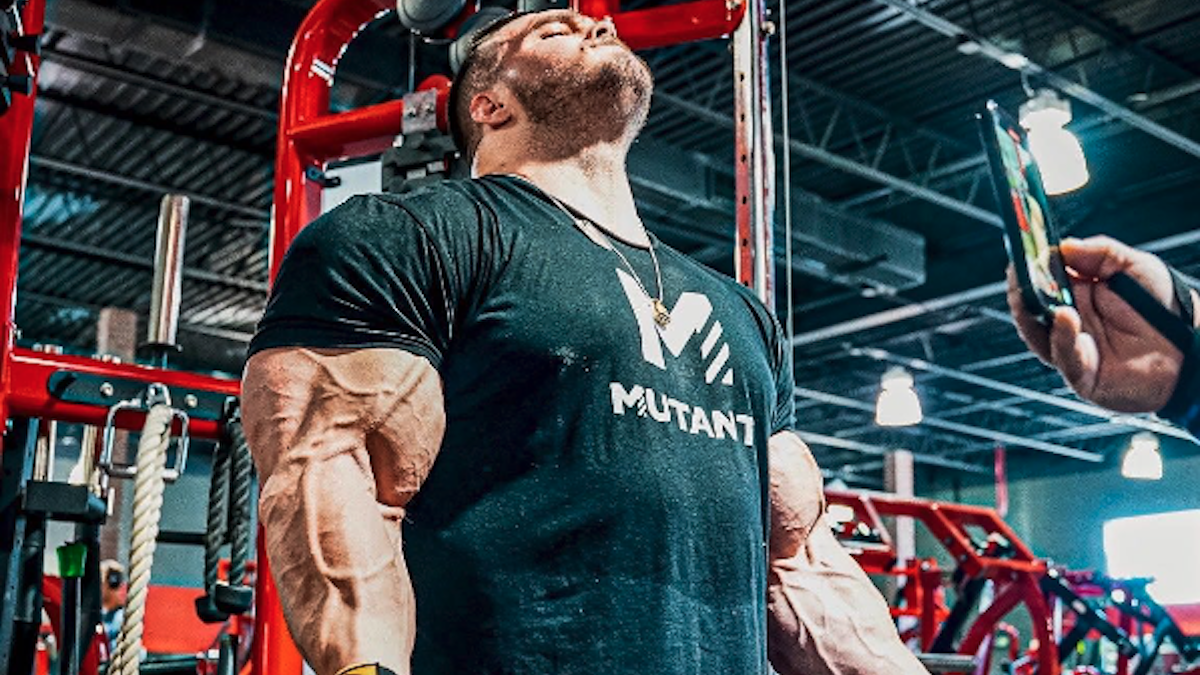 2021 Olympia fifth-place finisher Nick Walker was joined by bodybuilding coach Brandon Long on Walker’s YouTube channel on July 30, 2022. The video featured the first episode of Walker’s new “Olympia Prep Series,” which will follow Walker’s training and day-to-day prep leading up to the 2022 Mr. Olympia in Las Vegas, NV, on December 16-18, 2022.

In the first episode of Walker’s “Olympia Prep Series,” he and Long team up for a chest, delts, and triceps workout. Check out the upper-body workout below, followed by a detailed breakdown of the workout:

Below are the exercises Walker performed during his upper body workout:

The first movement in Walker and Long’s workout is the pec deck flye to warm up the joints and get their blood flowing in the chest for the heavier movements to come. Walker the pec deck machine provides a good warm-up and pump, though it could be utilized for hypertrophy purposes as well. After several working sets, Walker and Long perform drop-sets to near failure. The stack is not nearly enough for “The Mutant” as he adds a 45-pound plate to it.

I like to start with a flye, get a good stretch, a good contraction — really pumps up the chest for the heavier compound movements, as well as prevent injury.

The first compound movement in Walker’s workout is the incline dumbbell press, which Walker works up to 165-pound dumbbells on. Walker is a big fan of dumbbell pressing movements as they ensures even muscular development on each side of the body, leading to a overall chest in his view.

[Related: Derek Lunsford Focuses on Mobility and Range of Motion to Build His Chest for the 2022 Olympia]

The second compound working movement in Walker and Long’s workout is an incline plate-loaded press machine. The machine they use has the option to add resistance to the upper, middle, and lower portions of the movement to hit the each set of muscle fibers differently. Walker and Long work their way up to two 45-pound weight plates on the middle sleeves, a 25-pound plate on the upper sleeves, and another 45-pound plate the bottom sleeves. They hit a working set following with a back-off set.

Moving onto shoulders to give the chest some rest, Walker and Long hit behind-the-back cable side laterals. This shoulder movement helps work the delts in the stretched position, which helps build capped shoulders.

Back on chest, Walker and Long head over to a plate-loaded flat chest press machine. Saving heavier compound movements for the end of a workout can make them more effective by pre-exhausting the muscle. Their last set was a drop-set to finish off their chests.

Moving onto the triceps, Walker and Long hit pushdowns using straps instead of a rope to put more emphasis on the triceps. Triceps pushdowns are a great movement for not only warming up the triceps but building thickness in the horseshoe-look that is desirable in the side triceps pose.

The second triceps movement and last exercise of the day was the seated plate-loaded dip machine. Using a seated machine allows for Walker and Long to add additional load without the need to stabilize themselves like they would need to in a standard dip.

[Related: Bodybuilder Hunter Labrada Shares How Many Warm-Up Sets He Does During a Workout]

Looking to the Olympia

Walker technically began prep the week before meeting up with Long but caught a stomach bug that set back his schedule. Walker is slated to compete at the 2022 Mr. Olympia contest on Dec. 16-18, 2022, in Las Vegas, NV. His fifth-place finish at his Olympia debut in 2021 secured his slot for 2022. We’ll see if during this Olympia prep series Walker does enough to satisfy the 2022 Mr. Olympia judges to the point that they award him the Mr. Olympia title over two-time reigning Mr. Olympia champion Mamdouh “Big Ramy” Elssbiay.