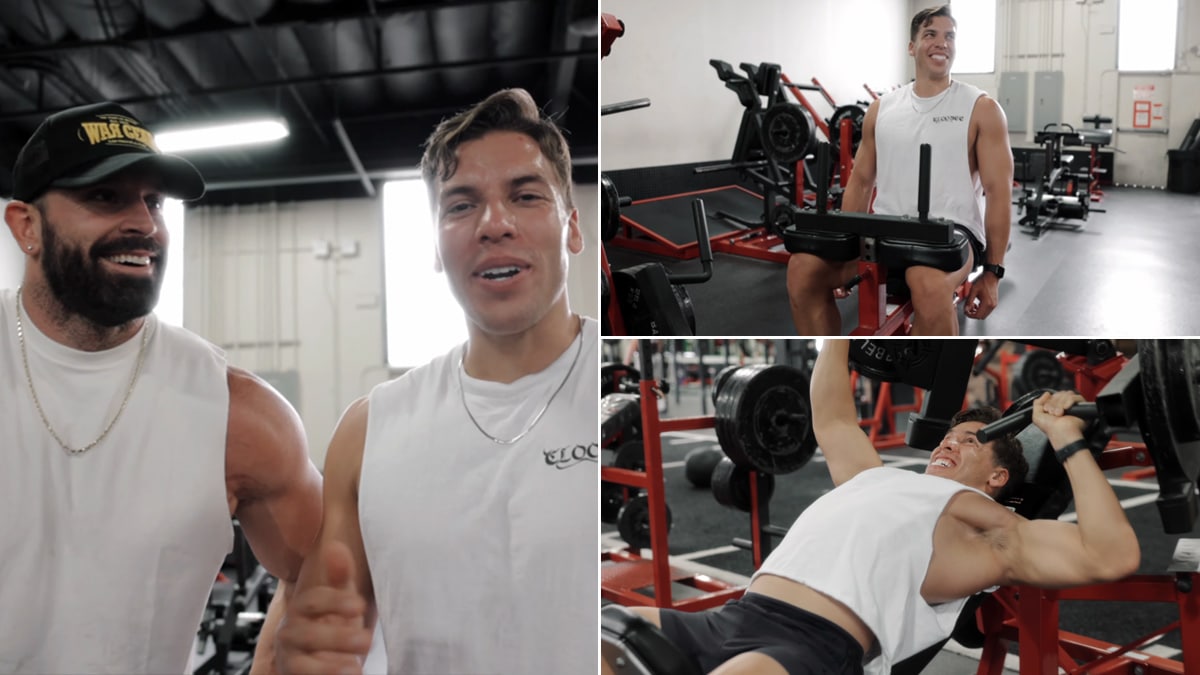 Despite being one of Arnold Schwarzenegger’s sons, Joseph Baena remembers a time when he was the ‘chubby’ kid in his crew. In a recent workout video with fitness influencer Bradley Martyn, Baena talked about his addiction to the gym and his appreciation for bodybuilding.

Baena, like Arnold Schwarzenegger, attracts a lot of attention with his toned arms and impressive chest development. He has an uncanny resemblance to his father, which was on full display when he recreated some of Schwarzenegger’s most famous bodybuilding poses.

Following in Arnold’s footsteps, Baena dove into the world of acting. He received widespread notoriety for his role in one of his latest acting projects, Lava. In addition, Joseph also bulked up when he took on a role for the marquee action film Call of Duty: The Last Airshow. Even with a busy schedule, Joseph values attending the gym and pushing the pace.

There is no doubt that Baena inherited a love for bodybuilding from his father. Joseph learned the ins and outs of the sport after he started lifting weights. Once he found a passion for pumping iron, he asked seven-time Mr. Olympia and bodybuilding legend, Schwarzenegger for guidance.

The aspiring actor has remained dedicated to training since learning the basics of bodybuilding in Arnold’s encyclopedia. Joining Baena is former bodybuilder and fitness influencer Bradley Martyn. Martyn is known for captivating audiences with ridiculous feats of strength. With four million followers on Instagram and three million on YouTube, Bradley’s name is well known in the online fitness community.

Baena said he wasn’t always this fit but after being cut from sports teams in college, he decided to take things more seriously at the gym.

“I was the chubby kid in my crew. It was until I joined swim my sophomore year — and I only joined swim because I didn’t make the soccer or basketball team. I got cut because I was too chubby.” Joseph explained to Bradley Martyn.

According to Baena, he didn’t start hitting the gym hard until his junior year in college. After taking an interest in weightlifting, his dad recommended he read his famous bodybuilding encyclopedia.

“No. I didn’t really start hitting the gym until my junior year of college. I started lifting, and my pops, Arnold Schwarzenegger, if you don’t know, so he gave me the Bodybuilding Encyclopedia, his bodybuilding encyclopedia.”

“So… I open up the book, he’s like, ‘look, every question that you have is right in here. So do your research.’ I took that to heart. I really dove in there and nonstop, just only the bodybuilding encyclopedia. Then I got cut again, and that really started my addiction to the gym.” Baena shared.

Martyn and Joseph hit some reps on the seated calf machine following their bodybuilding discussion.

“That’s as low as it goes.” Joseph responded.

Bradley joked with Baena by saying he thinks he can beat his dad Arnold Schwarzenegger if he was in his prime.

When asked if there was anyone that could have beaten Schwarzenegger, Joseph said the sport and the way people look is ‘so different’ now, so it’s hard to say.

“The lines are so different now. Joe added. The conditioning now is a lot more dry. To me, it doesn’t look like a sculpture anymore, it looks like a bodybuilder. I don’t know. It’s a tough one.”

Baena and Bradley move on to a dumbbell workout next and practice reps on the chest press machine. Before calling it a day, Joe opted to get in some cable movements.

Joseph doesn’t miss a day of training. He recently showed off a quad-burning workout and stressed how important it is to start the week with leg day. While Baena has expressed interest in one day proving himself on a bodybuilding stage, he’s yet to reveal when that might take place.

Check out the full video below:

Baena’s addiction to the gym fuels him anytime he picks up weights. Judging by his recent workout with Bradley Martyn, Baena, like his father, understands the finer details that can turn a good workout into a great one.