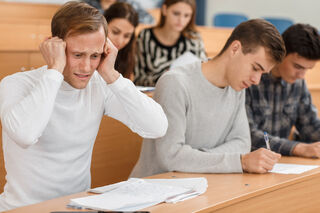 Some anxiety before tests is useful, as it can help motivate a student to prepare for a test and help the student remain careful during a test (Porcelli & Delgado, 2017). However, when anxiety becomes too great, it can impair test performance.

Some students become so nervous before a test that they cannot study effectively, become so agitated while taking a test that they cannot recall what they have learned, or provide erroneous responses despite knowing the subject matter. When students experience severe test anxiety, they often expect to have repeated difficulty with test taking, which adds to their level of anxiety.

Some patients develop physical symptoms because of test anxiety, including sweating, rapid heartbeat, shaking, dry mouth, faintness, and nausea. Test anxiety can also cause patients to become depressed because they feel they cannot perform well in an academic setting.

Test anxiety may develop in students who are very demanding of themselves or are under pressure from their parents or other authority figures to perform well on a test. Some of these students become very worried that they will be unable to meet such expectations. Other students fail to prepare well for their tests and become anxious that this will become apparent due to taking a test.

Treatment for test anxiety should be aimed at the underlying cause of the anxiety. For example, students who demand perfection of themselves can be taught that a better strategy is to expect that they do “well” rather than achieve a very difficult and often impossible goal of achieving perfect results (Spielberger et al., 2015).

Students who do not prepare well can benefit from discussing how they might study more effectively. For example, they might be encouraged to develop a study routine and to begin studying early rather than waiting until the last minute before a test. Students can benefit from being honest with themselves when they do not understand a concept, in which case they might ask for help from their instructor.

As is the case for many psychological issues, sufficient sleep, good dietary habits, and regular exercise can help reduce test anxiety. It can be very helpful to take a break for a snack during a prolonged study session or a long test if permitted.

Hypnosis can be a very useful tool in the treatment of test anxiety. In a hypnotic state, students can encourage themselves with positive self-talk such as, “I have studied well for this test, and I want to be able to show what I have learned,” or “I want to be able to think clearly while taking the exam.”

While studying for a test, immediately before or during a test, students can calm themselves through hypnotic relaxation techniques. For example, during hypnosis, they can imagine being in a calm place, which allows their mind and body to relax. The relaxation can be further enhanced with slow, deep breathing in which the students inhale through their noses and exhale through their mouths.

They can then learn to rapidly trigger their relaxation response with a deep breath or making a gesture with their hands, such as unclenching a fist. Because of the brief time it takes to apply. The rapid relaxation response is especially useful as a calming strategy while taking a test.

Rehearsal for a test in hypnosis can be very helpful. During the days leading up to a test, students can imagine being in the test-taking room, taking the test confidently, calming themselves as needed while taking the test, and how good they will feel once they have completed the test during which they performed well.

Such mental rehearsal helps prepare their minds for success, including by countering the negative thinking process that might have led to the perpetuation of their test anxiety.