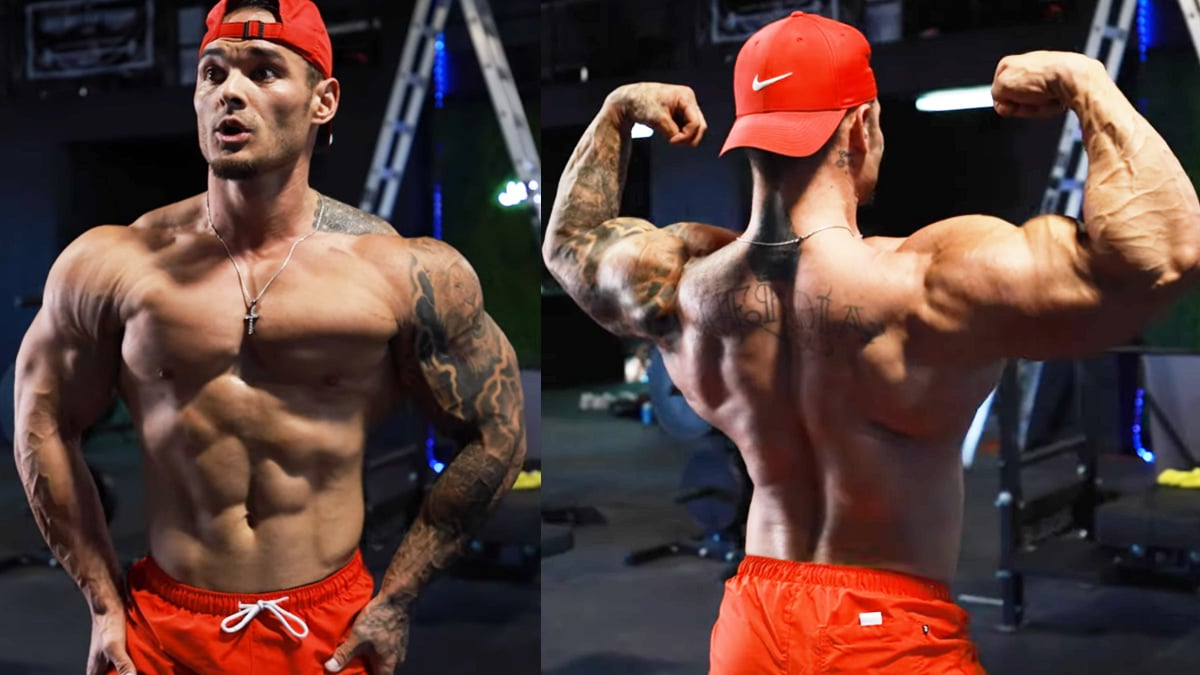 Bodybuilder Jeremy Buendia is on the verge of returning to competitive bodybuilding. In a recent YouTube video, Buendia revealed that he’s starting to bulk up for a comeback and intends to compete on stage at his ‘biggest ever’ weighing 220 pounds.

Men’s Physique Olympia champion Jeremy Buendia dominated in his division from 2014-2018, winning a total of four Sandow trophies. His popping delts and full chest were some of his best weapons on stage. However, he was ultimately outgunned at the 2018 Mr. Olympia contest, when he finished in fourth place behind Ryan Terry, Raymond Edmonds, and champion Brandon Hendrickson.

In 2020, Jeremy was planning to make a comeback and announced that he would train in Kuwait at the infamous Oxygen Gym to facilitate the return. Despite those ambitions, Buendia never made it to the Olympia stage. Although, in April, he garnered attention from the bodybuilding community with an impressive physique update. At the time. Jeremy was leaving the door open for a possible return, however, targeted Classic Physique instead of Men’s Physique.

With his eyes fixated on another Olympia title, Jeremy Buendia has big plans for this year and next. He intends to bring his biggest look ever to his next Olympia contest. But first, the Men’s Physique standout is planning to bulk in preparation for his next show.

Jeremy Buendia Announces Comeback: ‘I’m Ready Mentally and Physically to get Back After It’

In a video shared on YouTube, Jeremy revealed how he plans to come back to competitive bodybuilding ‘bigger’ than ever.

“Next week, I officially start my off-season – my bulk in preparation for my next competition. You guys, it’s been a long time since I’ve been on stage, since 2018. I took a lot of time off. I’m ready. I’m ready mentally, physically, to get back after it,” Jeremy Buendia explained. “I’m eager to get back on stage and show you guys what I’m capable of doing.”

Buendia is happy he’s been able to retain a lot of his size despite taking years away from bodybuilding. He revealed his current weight of 192.4 pounds, which he described as a starting point for his 2022 season.

“192.4 you guys. That is the beginning weight. I have dropped 10 pounds in the past five weeks, as expected coming off of everything. It’s not easy like bridging in between; energy is low. Motivation can take a toll but staying mentally sharp is really important during this time and eating good and still hitting the gym consistently. I’ve been able to hold on to a lot of size. ”

According to Buendia, his blood work showed that his cholesterol was ‘slightly elevated.’ He added that his liver enzymes were also elevated, which prompted the bodybuilder to start taking supplements for cholesterol and organ support.

“Everything has looked a lot better since when I originally started working with them 18 months ago. Even though I packed on some size, I’ve been on. I’ve progressively gotten healthier with their help and support.

We had a couple things that were off — my cholesterol was slightly elevated. My liver enzymes were slightly elevated but since then, they put me on some supplements like cholesterol support and organ support to get me primed and ready for what we are going to do in a couple of weeks,” Jeremy Buendia shared.

Jeremy is planning to bring his biggest look when he makes his return though he wouldn’t directly name any shows he’s currently preparing for.

“It’s been a long time since I pushed my body the way I’m about to push it. I know what I’m capable of when I’m operating at 100 percent. I have a lot of high expectations for myself the next few months, especially the next 16-18 weeks of this bulk. You guys can expect to see me get to my biggest ever. The goal is 220. If I get to 225 that will be ideal,” Jeremy said.

The four-time Men’s Physique Olympia winner understands that his competition has only gotten better since stepping away from the sport.

“I’m excited because I haven’t pushed my body this way in a long time. My receptors are clean. My body is healthy. I’m feeling really optimistic that I’m going to get to my biggest and best ever,” says Jeremy. “Preparing myself for battle in 2023. The competition has gotten so much better since I was last on stage. I’m excited to see these guys battle because it’s going to give me an idea of where I need to be next year to beat these guys.”

In spite of his accolades, Jeremy believes his four Olympia titles have ‘lost their weight.’ Before ending the video, Buendia showed off a posing routine.

“After my loss in 2018, a lot of things hit the fan for me. Honestly, I felt that all my accomplishments — all four titles previously, they lost their weight. I didn’t feel like I walked away from the stage the way I wanted to walk away from the stage.”

Buendia competes in the Men’s Physique category, but that hasn’t stopped him from starting beefs with bodybuilders from the Men’s Open division. In particular, he went on a rant after Open class’ Antoine Vaillant posed in board shorts. Buendia interpreted that as an insult to Men’s Physique competitors. Eventually, the feud was buried and Vaillant sold the board shorts for charity.

During Jeremy’s time away from the sport, all divisions — including Men’s Physique have gotten extremely competitive. If Buendia is able to add size and win another Olympia title, it would be one of the most impressive comebacks in modern bodybuilding history.

Watch the full video below: