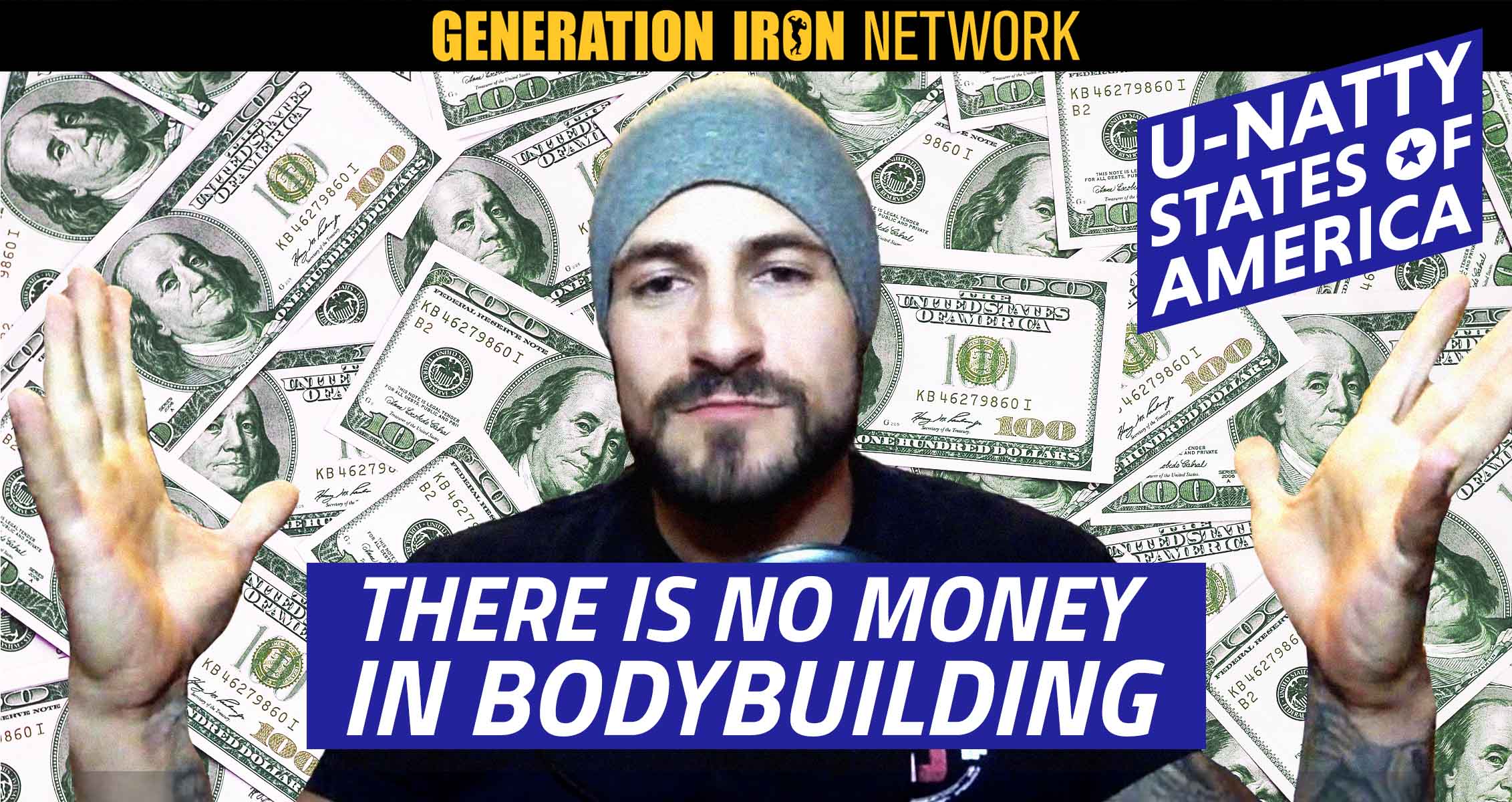 Pro natural bodybuilder Brandon Lirio is a 3x Natural Olympia champion and a standout name in the sport. That’s why we’ve partnered up with Lirio to produce the brand new podcast – U-Natty States Of America. Looking honestly at all things bodybuilding, strength sports, and fitness but from a natural perspective – Lirio is fully transparent about the ins and outs of all things fitness. In our premiere episode, Brandon Lirio gets honest about the reality of earning money in bodybuilding – from prize money to sponsorships and everything in between.

Competitive bodybuilding as a whole is bigger today than it ever has been. While not a mainstream sport on the level of the NFL or NBA, competitive bodybuilding is a multimillion dollar industry. It has more competitors and divisions than ever before. There are also more leagues (both natural and untested) than ever before. It’s a sport where athletes can earn true success and many have made entire lives off of their success in bodybuilding. However, it’s not the cash cow many might assume.

Brandon Lirio is a bodybuilder who has the benefit of competing briefly in the NPC and then also in the INBA/PNBA natural league. The NPC (and IFBB Pro league) is the biggest bodybuilding league in existence. It’s also an untested league. The INBA/PNBA is the biggest natural league – though can’t claim to bring the same size and scope as the IFBB Pro in terms of overall viewership. With this in mind, Lirio has seen both sides of the coin when it comes to the two biggest leagues in both natural and untested leagues.

That’s why Brandon Lirio decided to kick off his premiere episode of the podcast by breaking down the realities of earning money in bodybuilding. While going pro is a huge first step towards financial success in the sport, it’s not an automatic promise of incoming cash. In fact, it could be far from it. That doesn’t mean success is impossible. Clearly we’ve seen many success stories across this sport. But it does mean aspiring bodybuilders will need to open their mind about what to expect financially and how to think outside of the box to bring in more stable cash flow. Let’s jump into it.

Bodybuilding prize money and the odds of winning a stable income

Brandon Lirio may have lived through competing in a major bodybuilding league – but he also wants to back up his experience with facts. That’s why he starts off this discussion about money in bodybuilding by breaking down what it takes to first go pro, the costs, and the continued costs of entering specific events. He then cross examines these estimated fees with the reality of prize money.

Going pro costs money, entering a competition has entrance fees, and competing in a competition will more often than not require travel and accommodations. Beyond this – most bodybuilders require a series of supplements in order to bring their physiques to a stage-ready level. This adds up throughout the year, every year.

Brandon Lirio then compares this to the prize money earned at competitions. For natural leagues like the INBA/PNBA, the prize money is admittedly lower than the IFBB Pro. A typical first place winner could expect to earn about $10,000 in cash. While the IFBB Pro can bring in more – it’s not that vast of a difference when considering every single competition throughout the year.

Yes, big shows like the Arnold Classic and Olympia can give the first place winner big prize purses. Even second or third can earn good cash. But once you get into second or third tier competitions – the prize money goes down.

Big Ramy won $400,000 for winning Mr. Olympia last year. That’s a lot certainly. Second place gets $150,000, third place gets $100,000. When you go down to the bottom of the top five, fifth place gives you $40,000. Considering that most of the top five Mr. Olympia competitors only compete once – at the Olympia – this means the fifth place winner only earned a yearly salary of $40k from the sport itself.

If you expand this past the Men’s Open division it drops down significantly. Chris Bumstead earned $30,000 for winning the Classic Physique Olympia. It was the only event he competed in all year.

Just looking at the Mr. Olympia prize money already starts to show the challenges in relying on prize money alone for income. And it must be noted that these are the best in the world. Yes, you should go into competing with confidence that you can be the best. But financially, it must be made clear that for every one winner – there are dozens and even hundreds of losers. If Bumstead earns $30k for his victory at Olympia, what can you expect to earn if you don’t even win enough to qualify? It’s a reality that must be considered.

Brandon Lirio points out that the reality of this sport is to supplement your income with parallel revenue streams. While placing fifth at Mr. Olympia might not give you enough prize money to live comfortably, it can bring attention to your name for more opportunities. This is where sponsorships come in. Or if you are more willing to take risks, you can start your own supplement business.

Lirio also points out that many working competitive bodybuilders also double as personal trainers. They use the knowhow from years of competition to help others get in shape – and make money while doing it.

When considering how how statistically unlikely it will be that you become the next Phil Heath, secondary jobs like these are necessary in order to do what you love in bodybuilding and live comfortably with a stable income. There’s nothing wrong with that. It just needs to be something that is understood going into the sport.

Brandon Lirio understands that all sports leagues are businesses. They have bottom lines and they have costs and labor to pay for. With that in mind, Lirio’s exploration into finances in bodybuilding are not meant to lambast the leagues. The leagues, overall, do well in bringing a sport we love into more and more households every year. They support athletes and the give them a platform to compete.

The point of this episode, is to help set realistic expectations for those newly entering the sport. Pro bodybuilding will not make you rich in and of itself. You must have an open mind and look towards what opportunities bodybuilding can bring for more financial success. Maybe it’s personal training. Maybe it’s professional coaching. Maybe it’s being sponsored or starting your own supplement or apparel business.

Whatever it is, the one thing you should not rely on is getting rich from prize money alone. It can happen for a very select few. But how long are you willing to place your bets on those low odds before your life passes by with nothing in the bank?

You can watch Brandon Lirio go into complete detail about money in bodybuilding by watching the premiere episode of U-Natty States Of America above. Make sure to check back every Wednesday for new episodes of the podcast only on the Generation Iron Fitness Network or wherever podcasts are downloaded.