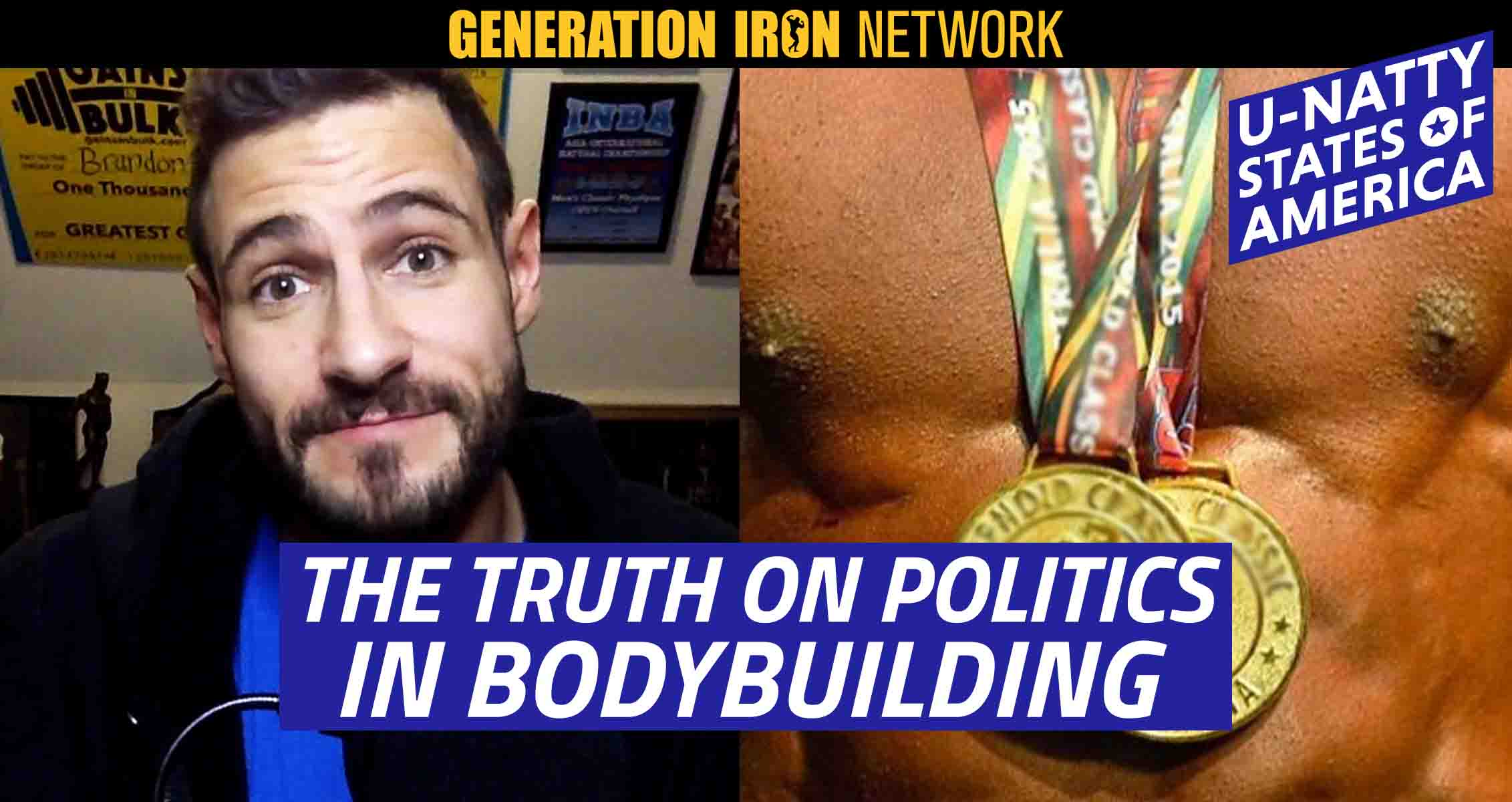 Unlike many sports that rely on points and goals, competitive bodybuilding is a sport that has a core level of subjectivity. It’s more akin to a beauty pageant than something like football. A criteria is set for the physiques but judges have to use their own taste in applying that criteria to how they score the athletes. Due to this, many have worried or made claims that “politics” corrupt the competitions. That judges will favor higher scores for certain athletes regardless of criteria. In our latest episode of the U-Natty States Of America podcast, Brandon Lirio breaks down the reality of corruption claims, myth busts popular theories, and explores the psychology as to why athletes (and fans) might believe that politics affect competition results.

You’ve seen it before. A much hyped pro bodybuilder loses just short of the Olympia Sandow trophy. Suddenly, fans scour the internet and make side by side video and photo comparisons. It becomes a clear narrative – the pro bodybuilder had a better physique but still lost. Why? Politics most likely. The person who did end up winning was favored due to relationships with the judges, or perhaps having paid dues in the past, or maybe he is just a better ambassador for the sport.

In today’s day and age of online media, fans and athletes alike are able to scrutinize the results of a bodybuilding competition. There are now hundreds of photographs and live stream video to play and replay. Sometimes if you look at the same thing long enough – you start to see connections that aren’t really there. Maybe you start to believe that corruption was involved. Most of the time – that’s far from the case.

Brandon Lirio has been an NPC bodybuilder, and a pro natural bodybuilder in the INBA/PNBA for most of his adult life. He’s also been a personal trainer for bodybuilders. He’s even judged a few competitions. With his expertise both behind the scenes, as an athlete, and as a fan – Lirio decided to focus this week’s podcast towards politics and corruption in bodybuilding. And explain why it’s so easy for fans and even athletes to believe a loss came from politics rather than simply being bested. Let’s jump into it.

What do we mean when we talk about politics in bodybuilding?

Now that we have the definition out of the way – let’s jump into Brandon Lirio’s analysis about politics in bodybuilding.

Based on Brandon Lirio’s definition of politics in bodybuilding, you might already see some cracks as to the validity of these claims. For example, how is it possible to truly determine an objectively better physique? Yes, there is a set of criteria – but ultimately it is subjective to determine if one person’s small details are better than another. This is especially true in the biggest pro shows of the year – where most athletes are so close in skill level that only the smallest details determine the score.

Brandon Lirio also points out that it’s nearly impossible to not forge relationships with judges or other people of note in a federation. If you are a bodybuilder who competes in the industry for years – you will get to know the judges and the promoters. So it’s completely normal to say hello to a promoter, laugh a little and crack some jokes.

However, it’s only after an athlete loses, that those small relationships start to get questioned. Did that bodybuilder say hello to a judge in order to gain favor and win the show?

Brandon Lirio believes the answer to that question is almost always no. But for athletes and fans, it’s always more comforting to believe that a person lost due to a specific reason. Rather than the athlete simply not being good enough – even at their best.

Brandon Lirio points out that when a bodybuilder brings their best package to the stage. When deep down they know this is the best they can do – losing becomes more than a letdown. It can become an identity crisis. So athletes will look for other excuses that take the blame off of themselves. “I didn’t lose because of being worse than my competitor. I lost because of politics and corruption.”

Lirio uses his training background as an example of this. Over 12 years of training competitive bodybuilders, he has seen one trend time and time again. In the final week of contest prep, the athlete makes a mistake. Throws off their planned diet. Why does this happen? And why so consistently in the final week?

This is the very question Brandon Lirio asks his clients. What he’s come to realize is that the athlete is self sabotaging. In essence, it’s easier to know why you lose than to bring your best with no error and still lose anyway. It’s the difference between that one mistake being the reason you lose vs the very essence of who you are.

Brandon Lirio believes this same mentality goes into conspiratorial thinking. This is true of the larger world as well as the debate of politics in bodybuilding. Add on top of that a subjective aspect at the core of the judging – and it’s near impossible to prove right or wrong.

With all of this in mind, what can be done to make fans and athletes more confident in bodybuilding federations? Brandon Lirio thinks that a more transparent look at how judging criteria is scored will do wonders. He also thinks that having a transparent and clear set of rules and guidelines on how judges get certified helps as well.

Division creep is a very real thing. The Men’s Physique division looks very different than it did when it first started. The athletes are larger with more muscle than the division ever envisioned. But has the criteria on paper changed? Judges will adjust their personal scoring and criteria simply by seeing how a competitor looks compared to the other athletes. So if everyone is looking bigger in Men’s Physique – that becomes the standard. That might not be stated on paper but it’s true.

You can watch Brandon Lirio go into even more depth on politics in bodybuilding in our latest episode of the U-Natty States Of America above. Make sure to check back every Wednesday for new episodes only on the Generation Iron Fitness Network or wherever podcasts are downloaded.