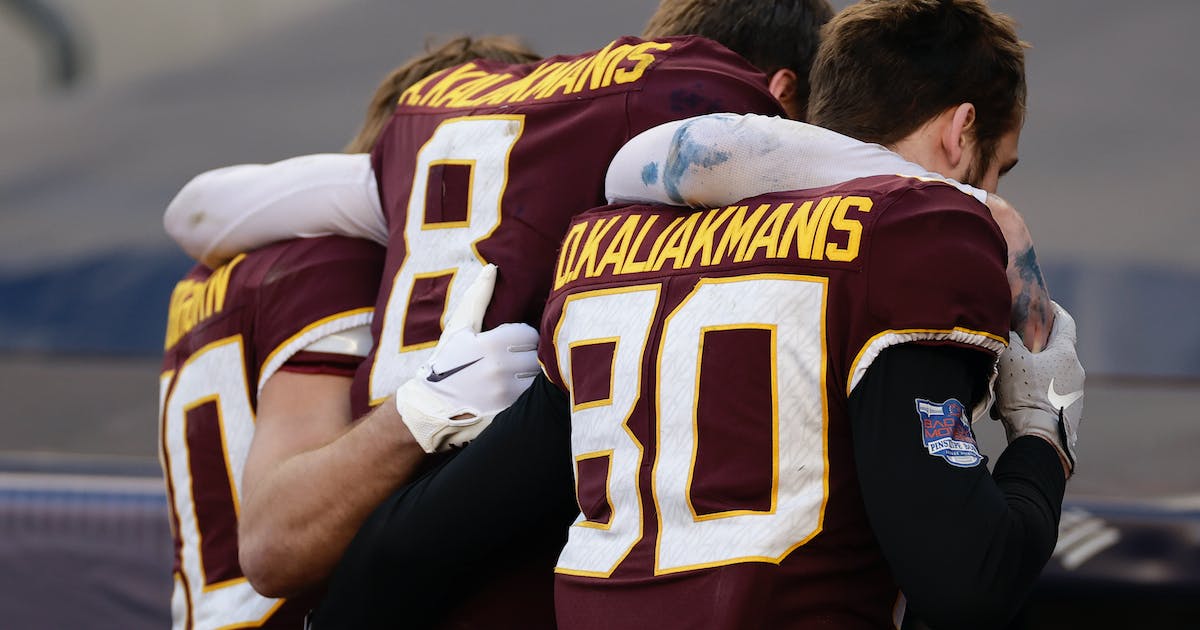 The Gophers football team had its quarterback of the future suffer a leg injury while playing an exhibition game in a baseball stadium on a field surface that provided as much traction as black ice.

Fortunately, the day ended in smiles, not dread, as the Gophers were able to exhale and celebrate a sixth consecutive bowl victory.

Coach P.J. Fleck did not elaborate on the specific nature of Athan Kaliakmanis’ injury other than to acknowledge that it is “nothing long term,” which is the No. 1 takeaway from a 28-20 win over Syracuse in the Pinstripe Bowl held in Yankee Stadium.

The curse of Yankee Stadium for Minnesota sports appeared alive and well when the redshirt freshman quarterback took a hit to the legs after releasing a pass in the second quarter.

Kaliakmanis could not put any weight on his right leg as athletic trainers helped him off the field. The terrible condition of the grass field didn’t appear to play a factor in Kaliakmanis’ injury, but the optics of him needing assistance to the locker room made everything else happening in the game feel trivial.

TV cameras showed Kaliakmanis on the sideline in a walking boot in the second half.

Budding star linebacker Cody Lindenberg also suffered a lower leg injury that forced him out of the game in the second half.

Fleck described the injuries to both players as “not minor but not major.” He said both would have missed a few weeks had the injuries happened during the season but not lengthy absences.

“That’s definitely a blessing,” he said.

Injuries in lower-rung bowl games feel extra sobering because these games are exhibitions and players then must begin the offseason facing recovery and rehab, or surgery in the worst cases.

Optimism over Kaliakmanis’ future is a starting point in conversations about the program, so Fleck probably had a lump in his throat as his quarterback lay on the field.

“They’re going to be OK,” Fleck said afterward about his injured players.

Both teams were lucky to avoid more injuries considering the treacherous field conditions. Players were forced to cut and plant gingerly to avoid slipping and sliding. They looked like pedestrians trying to navigate an icy sidewalk. Game speed was slower as players were cautious with their footing.

The Big Ten should put an end to their bowl arrangements held in baseball stadiums because field conditions deteriorate and threaten player safety. The Gophers played on a slippery surface at Chase Field in Phoenix last season in the Guaranteed Rate Bowl, and the field at Yankee Stadium was embarrassingly bad.

The irony here is that the game’s title sponsor is Bad Boy Mowers, a company that specializes in lawn care. The winner’s trophy should have come with a piece of sod ripped out of the muck.

Gophers All-America center John Michael Schmitz made a wise decision to skip the game as he prepares for the NFL Draft.

Alas, there were some wonderful moments for the Gophers to celebrate and cherish as an era closes for a group of senior leaders who stayed long enough to be considered old-timers.

Mohamed Ibrahim finished his brilliant career by setting a handful of school rushing records. Ibrahim deserves a final standing ovation as he takes off his jersey for the last time, his legacy secure as one of the program’s all-time great performers.

And Tanner Morgan got the opportunity to finish his career on the field after replacing Kaliakmanis in the first half. Morgan threw two touchdown passes and sealed the game with a Victory Formation kneel-down.

Concussions disrupted his final season and opened the door for Kaliakmanis to show his big-armed talent. Morgan represented the program and university in a classy manner at every checkpoint over six years — in success and struggles — and he will no doubt excel in whatever he chooses to do next.

The Gophers were fortunate that the send-off became the primary focus in the postgame celebration, and not worse news on their quarterback of the future.

The Star Tribune did not send the writer of this article to the game. This was written using a broadcast, interviews and other material.